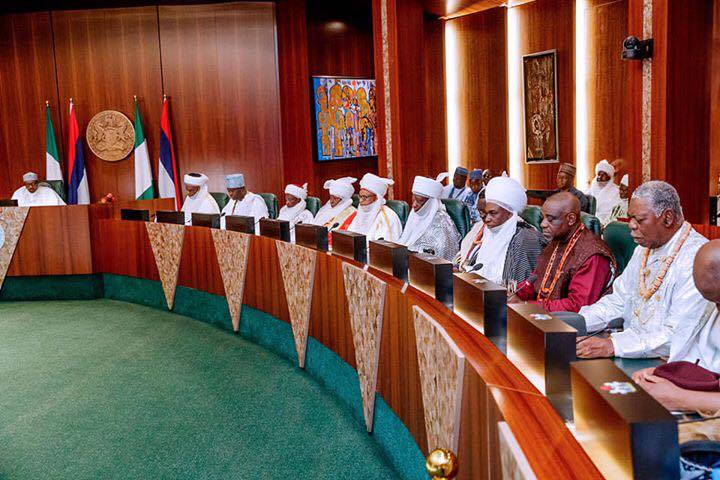 President Muhammadu Buhari Tuesday welcomed traditional rulers in the country to the “Next Level”, urging them to be prepared to play a crucial role in the prevention and detection of criminal activities in their domains.

Speaking while receiving members of the National Council of Traditional Rulers led by the Sultan of Sokoto, Alhaji Muhammad Sa’ad Abubakar III, at State House, Abuja, the President noted that involving the royal fathers had become necessary in view of the deep knowledge of their localities.

According to him, “You know all the families who harbour criminals and you know those who produce respectable individuals. You know the weaknesses of our society. We need your support to consolidate our achievements.”

President Buhari listed several significant efforts by his administration to enhance national security while emphasising the overall need for stability in the country.

The President also welcomed the royal fathers to his “second and final term, at the end of which I will, God willing, go to Daura and settle down.”

The Sultan of Sokoto and Co-Chairman of the Council, told President Buhari that the body “on behalf of all the Traditional Rulers in Nigeria, is here to congratulate you on your re-election as the President of the Federal Republic of Nigeria.”

Urging “all Nigerians to accept the election result as the will of God,” the Sultan assured the President of the traditional rulers’ “continued unflinching support in your laudable projects, particularly your government’s cardinal objectives of fighting corruption, containing insecurity, generally sanitizing the governance machinery, entrenching discipline, hard work and peaceful co-existence amongst the citizenry.”

The Co-Chairman of the Council and Ooni of Ife, Oba Adeyeye Ogunwusi Ojaja II, assured President Buhari that their members would work very closely with his administration to fight criminal activities.

The Ooni urged the re-elected Nigerian leader to be a President for the whole nation and father to all citizens.