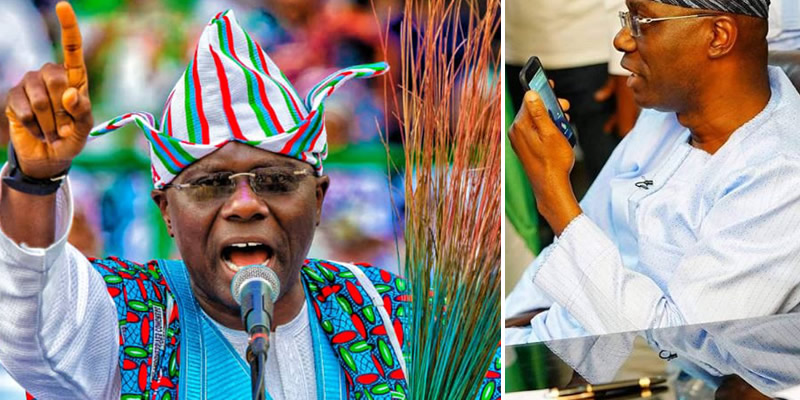 The governorship candidate of the Peoples Democratic Party, PDP, has called to congratulate Babajide Sanwo-Olu on his victory at Saturday’s governorship election in Lagos.

Babajide Sanwo-Olu made this known via his verified Twitter handle. According to Sanwo-olu, the call came through at about 07; 07 pm on Sunday.

Sanwo-Olu, while appreciating the call, acknowledged the intense campaign between the two candidates, and promised to deliver a Lagos that works.

LAGOS governor-elect Babajide Olusola Sanwo-Olu yesterday accepted the mandate given to him to steer the ship of the state for the next four years beginning from May 29.

In his electoral victory speech, the governor-elect said the people have spoken resoundingly with the ballot, promising not to let them down.

Assuring that his eyes and mind are set on the future, Sanwo-Olu said: “Today, you did not just vote for Babajide Sanwo-Olu. You voted for that greater Lagos. I promise that together we shall achieve this. I do not make promises lightly. This is a promise that shall not be broken.

“A greater Lagos shall be ours. We shall construct it with the work of our minds, the grit of our hands and by the will and grace of Almighty God.”

He was reacting to the final results announced by the Independent National Electoral Commission (INEC). He appreciated all those who contributed to his victory.

They include: President Muhammadu Buhari, APC chieftain Bola Ahmed Tinubu, APC National Chairman Adams Oshiomhole and his spouse, Ibijoke, who he described as a pillar of support.

Sanwo-Olu said: “This means that indeed you the people have spoken and clearly too. By these words, I accept the mandate you have given and understand that it bestows a most profound honour and sober responsibility on me.

“I thank and commend all those who supported and contributed to this campaign. You have laboured and toiled countless hours and done so without complaint or hesitation.

“You exerted yourselves not just for me but because you believe in the rightness and wisdom of the vision we share for our state. You are too numerous and too many to name at this time. In the next few days, I will make sure I thank each of you personally for your contributions to this collective and progressive effort.

“Most of all, I want to commend and honour the voters. While this victory may bear my name because it must bear a name, this victory belongs to you, dear Lagosians.

“At this point, I would like to thank the leadership of my party both at the National and State levels. I also thank party members in Lagos, who believed in my candidacy and that of my Deputy, Dr. Obafemi Hamzat.

“To our lawmakers, both at the state and federal levels, thank you immensely. To the National Chairman of our great party APC, Comrade Adams Oshiomole, thank you for your support. To our committed, energetic and visionary national leader Asiwaju Bola Ahmed Tinubu, I say a big thank you too.

“To the leader of our party and President of the Federal Republic of Nigeria, Muhammadu Buhari, I thank you for the quality of leadership you provide. You paved the path to victory and we have followed you. We shall remain faithful to our progressive vision for a better Nigeria.

“To my dear wife, Ibijoke, I cannot thank you enough for being my pillar of support. To my Deputy, Dr. Hamzat, you are an excellent partner whose experience and intellect will serve this state. To his dear wife, Mrs. Remi Hamzat; we will stay united in the service of our people.

“This election signaled more than a vote for me or any other candidate. It was a vote, a referendum, on how a state and its people would define themselves. Would we be courageous and confident enough to seek our greater place in the world?

“Or would we turn so scared that we spend the greater number of hours fighting each other instead of joining ourselves in productive cooperation that will uplift the lives of each of us?

“We were confident that you would choose courage over fear and select cooperation over confrontation. You made this enlightened choice in resounding and clear numbers.

“Let us be completely frank and honest so that we may quickly clear the air of those things that might pollute and soil our politics if we allow them to linger.

“There were things said during this campaign that should not have been said. And tactics employed that were shortsighted and potentially disruptive to the social accord and harmony of purpose we have enjoyed in Lagos.

“Those who tried to use ethnicity to bring discord in hopes that such tactics might bring them victory have been sorely disappointed. The election is over. I ask them to cease and desist from this unwise conduct.

“Our people are generous in spirit, compassionate at heart and as fair-minded as any people can be. Despite the challenges that we may face, our people exist in a space that is above hatred.

“To be the leader of a people such as these is an honour of the highest level and a sacred obligation. A leader befitting this state and its people is one who unites and leads them to greater progress; not one who seeks to pit them against each other.

“To all those who competed in the election and even those who tried to sow discord, let me say that this day began as an exercise in democracy as the people voted. As the day has matured it has also evolved into a moment for reconciliation because the people have clearly made their decision.

“Whatever you said and did during this election is forgotten. I keep no ledgers of personal grievances and hold no grudges. You contested vigorously and did so as you saw fit. I respect anyone who enters the arena of public endeavour and submits themselves to the decision of the people.

“Politics is tough and competitive. For the many who might compete for an office, only one can win. You all gave much toward the election. Now it is time that we put aside insignificant differences that loomed during the election so that we can give even more and do even better for the good of Lagos.

“I am humbled that the people elected me as the governor to lead them the next four years. I vow to you, dear Lagosians, that my eye and my mind are too focused on the future, too fixed on where we must go to give a second thought to where you might have come from.

“Without doubt, Lagos is more than a space that we occupy. Lagos is a way of life that speaks of liberality of spirit and a commitment to excellence in all facets of human endeavour.

“If this describes your outlook on society and your relationship to your neighbour and fellowman, then you are a pure and true Lagosian. Nothing more needs to be said. No further questions need to be asked in that regard. You elected me because I have a vision in mind and a mission at heart that I must fulfil.

“Lagos is home to over 20 million people. Each day, thousands migrate into our state in search of opportunity and a better life. The geographic space we occupy is limited.

“Land is scarce. On this small space of land we call our state, we must provide livelihoods for all who are here today and all who shall come tomorrow. It requires a special people to meet this challenge.

“Lagos is so densely populated, that we are all each other’s neighbour and each other’s brother. With this spirit guiding us, our challenges do not daunt us. They inspire us toward greatness in three key ways.

“First, my administration shall advance and build on the tradition of constructing the modern infrastructure needed to improve living conditions and encourage greater business and investment by lowering the costs and increasing productivity.

“Second, we will strive to enhance social services to make sure the basic needs of the modest and poor are met and that no Lagosian shall be deprived of humane care and human dignity.

“Three, we will develop specific and concrete plans to establish the types of businesses and investment in Lagos that will provide sustainable growth and job opportunities for the 21st century.

“We must provide jobs and economic opportunity for this vast and industrious population. By doing so, we shall function as a catalyst for growth in Nigeria, in West Africa and the entire continent. Lagos will stand as the economic capital of the black race.

“In Lagos, we are limited by space but not by our capacity. Our creativity and drive are ample and tireless. My aim is no less than to construct a way of life and governance for Lagosians that will provide adequate employment and economic chance now and into the foreseeable future. We do this so that we may put our best asset – our human drive and ingenuity — to its most effective us for the good of all.

“We are already a great state. Our task is not simply to make sure we do not regress, but to push ourselves onward to an even greater Lagos.”