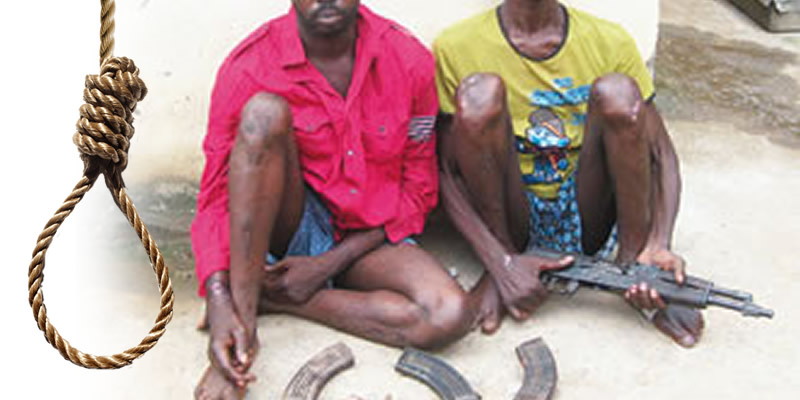 An Ado-Ekiti High Court has sentenced two persons, Adedayo Oluwayemi (27) and Daramola Seyi (23), to death for robbing a night club in the state capital.

Justice John Adeyeye, who handed down the sentence, held that the duo were guilty of the two-count charge of armed robbery and conspiracy preferred against them.

The judge found them guilty of violating Section 516 of the Criminal Code Cap C16 Laws of Ekiti State 2012 and Section 1(2) (b) of Robbery and Firearms (Special Provision) Act Laws of the Federation 2014.

Justice Adeyeye, however, discharged and acquitted the third accused person, Ogunleye Ige on the ground that evidence before the court showed that there was no nexus between him and the incident.

The accused persons reportedly invaded Ckib 15 Dynamic Lounge, Irewumi, opposite Bawa Estate, Ado Ekiti on 4th August, 2018, with guns and robbed their victims of their properties.

Some of the properties they robbed their victims of at gunpoint include: laptops, phones and sales for the day.

They were arrested at the point of selling the stolen items particularly the laptops and phones when they could not provide the passwords.

The accused persons were first arraigned in court on 16th October, 2017, when the charges were read to them, to which they pleaded not guilty.

Defence counsel, Toyin Oluwole, did not call any witness in the course of the trial.