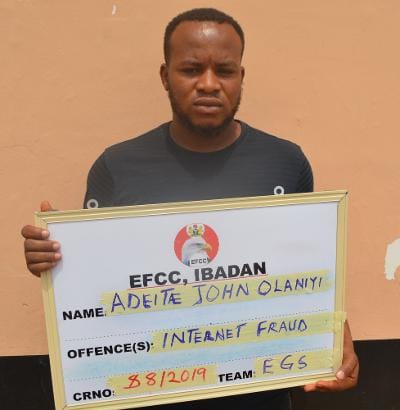 Opeyemi was docked on a three-count charge bordering on forgery and possession of documents containing false pretence.

The accused was arrested following intelligence report received by the Commission about some fraudulent activities involving him and some others.

He was alleged to have presented himself as ‘Solomon Smith’ with intent to defraud unsuspecting victims before he was arrested.

One of the count reads: “ That you, Owoeye Opeyemi (alias Solomon Smith), on or about the 21st December, 2018, at Lagos within the Ikeja Judicial Division of this Honourable Court, with intent to defraud, had in your possession a document containing false pretence captioned “You’ve got money”, when you knew or ought to know, having regard to the circumstances of the case, that the document contains false pretence and thereby committed an offence contrary to Sections 6, 8(b) and 1(3) of the Advance Fee Fraud and Other Fraud Related Offences Act No. 14 of 2006.”
He pleaded ‘not guilty’ to the charge when it was read to him.

In view of his plea, the prosecution counsel, Ahmed Yerima, asked for a trial date and urged the court to remand the defendant in prison custody.

The defence counsel, Ayodele Osikoya, however, told the court that he had just been briefed about the case and would file the necessary application before the next adjourned date.

Justice Solebo adjourned the matter to April 30, 2019 and ordered the defendant to be remanded in prison custody.