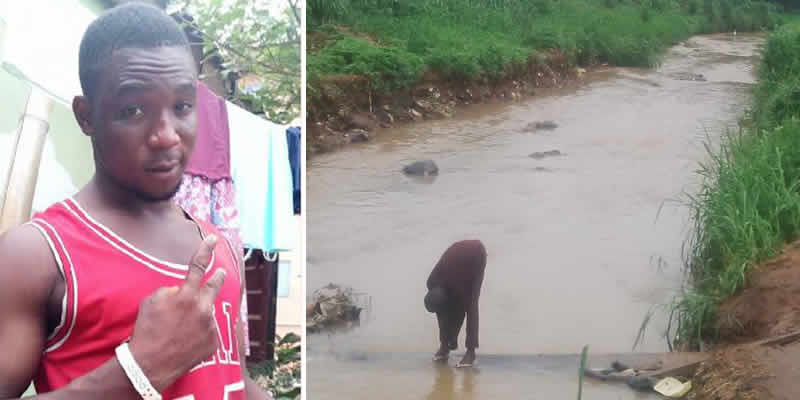 A suspected ritualist identified simply as Samuel has allegedly killed a 22-year-old , Quadri Omilani and dumped his body in a river in Abeokuta, Ogun State.

The deceased was lured to a birthday party organized by Samuel, from where he was allegedly seized, bounded and taken to a river where his body was dumped.

Samuel was also believed to be a suspected internet fraudster otherwise known as yahoo boy.

According to sources, it was at the party held on March 4, 2019 that Omilani got drunk and posted his photographs at the event on his social media pages.

Samuel urged Omilani to accompany him to see his mother and was being driven toward bush paths when the deceased became suspicious that something was fishy.

It was at this juncture Omilani told Samuel that he was no longer willing to accompany him to see his mother.

Sources said Samuel convinced him that his mother was a river goddess priestess and that she has a grove near the river. Victim’s corpse inside River after he was killed [IMG crdt: THE NATION]

It was gathered that Samuel suddenly brought out a small calabash and gave Omilani, but he declined.
Omilani was brutalized, bounded with a rope and spluttered incantations on his body before he was thrown into the river near Oyo dam in the Sabo area of Abeokuta.

Samuel was said to have confided in a lady called Halimat who was used to lure Omilani to the party that the deceased drowned in a river.

The lady was given Omilani’s mobile telephone with a stern warning never to answer incoming calls on the phone.

Exasperated by persistent calls from the siblings of the deceased, Halimat answered their call and relayed what Samuel had told her about Omilani’s tragic death.

Omilani’s body was later recovered from the river by the police.
Samuel, according to sources , has since been arrested by the police and transferred to state police command headquarters in Eleweran, Abeokuta.

Contacted, the spokesman of Ogun State Police Command, Mr Abimbola Oyeyemi said the case has been transferred to the Homicide Section of the State Criminal Investigation Department (SCID) where the suspect (Samuel) is currently being detained.