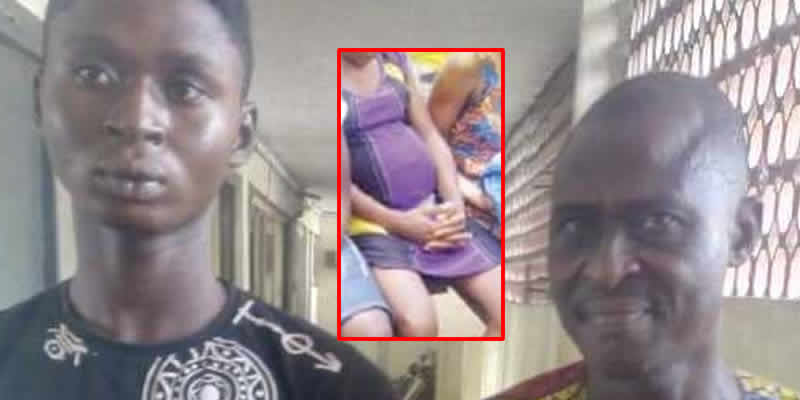 A 44-year-old man, Kabiru Oke and his son, Farouq, 19, have been arrested by the police in Lagos for alleged serial rape and impregnating a teenager

The incident happened at their 1, Olatikupo Street, Egbeda residence for about four months while the 13-year-old victim lived with her aunt, the man’s wife.

It was gathered that the girl had reported Oke’s sexual abuse on several occasions to his wife but she always shut her up and their son joined in the act when he caught his father raping the victim.

Unable to withstand the defilement, the girl, it was gathered, fled to her mother’s place in Ogun State in January where she was enrolled and school and her teacher discovered she was pregnant.

It was at the point the girl revealed her ordeals in her aunt’s home in Lagos, which prompted her mother to file a report at the police station. According to the victim, the sexual assaults first started October last year, when her aunt’s husband asked her to fetch water for him.

“He asked me to watch water for him to bath and I did. When I brought the water, he pushed me inside the bathroom and raped me. From then, he was doing it regularly. I told my aunt but she did not do anything about it.

Confirming the arrest of the suspects, police spokesman Bala Elkana, a Deputy Superintendent (DSP) said the case was reported at the Geneder Unit by the child’s mother on March 27, adding that the defilement by Oke commenced on October 20.

He said: “The second suspect, being the son of the first suspect started having unlawful carnal knowledge of the same minor on January 10. The suspects have constantly threatened to kill the victim if she ever told anybody about the affairs.

“The victim exposed them when her mother suspected some changes in her and discovered that she is pregnant. The survivor was taken to Mirabel Centre by Gender Unit for medical examination.

“The two suspects were arrested and charged to Magistrate Court two Ogba for defilement. The case was adjourned for May 13, while the suspects were remanded in Kirikiri prison.”

Elkana also confirmed the arrest of 45-year-old Marainerume Alfred, a resident of Oke Itunu Church Close in Ejigbo for alleged rape of a girl, 14.

“The matter was reported to our Gender Unit by the mother of the survivor. The complainant stated that they lived in the same street with the suspect. That the suspect usually called the survivor into his shop while on her way back from school, along Iyana Ejigbo Road and has unlawful sexual intercourse with her.”

According to Elkana, Alfred started committing the crime in May 2018 until he was caught on March 27.

He said the suspect admitted to the commission of the crime, adding that it started aftet he divorced his wife.

“The matter was discovered on March 27, at about 2pm by the survivor’s grandmother who perceived odour from her body when she returned home and subjected her to questioning. The survivor opened up to her grandmother and narrated the whole story.

“She further stated that, the suspect threatened that she will die if she disclosed it to her parents. That the suspect usually gave her some drugs to take and equally mix salt and water for her to take after sex, to prevent her from getting pregnant. Investigation is ongoing, suspect will be charged to court for defilement,” he said.