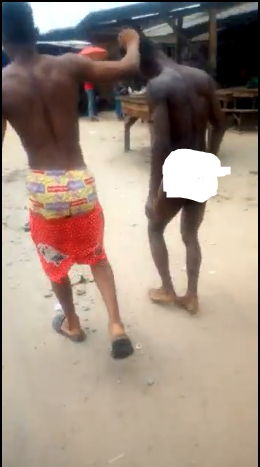 A young man got more than he bargained for after he allegedly tried to have gay sex with a man in Delta state. It was gathered that the alleged gay was set up and caught while attempting to have sexual intercourse with a young man in the region. It was also learnt that this is the second time the suspect has been nabbed for the same gay offence. Multiple videos trending online show the moment the alleged gay was stripped naked and humiliated by a group of boys.

He was paraded round the area totally naked as passersby looked on. After much embarrasment, the young man was allowed to go and warned not to be caught again. The anti-gay law bans homosexuality in Nigeria and imposes prison terms of up to 14 years for people prosecuted under the act.