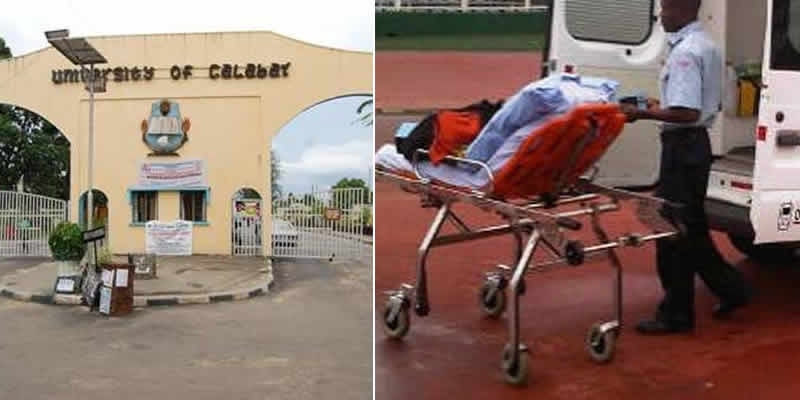 A 200 level female student of the Department of Food Science Technology, Faculty of Agriculture, University of Calabar (UNICAL) has been reported dead following the strike action embarked upon by Doctors.

The student, Miss Rebecca Chukwueke died after nurses and doctors refused to attend to her at the University of Calabar Teaching Hospital, UCTH on Saturday.

Findings revealed that Miss Chukwueke was ignored at the UCTH because the Doctors and other health personel were on strike but was rushed to the Nigerian Navy Reference Hospital at Murtala Mohammed High Way, Calabar, where she gave up her ghost following an unknown ailment.

The deceased’s colleague who declined given her name said “She was unconscious on Saturday morning at 12:27am when she was rushed to the University of Calabar Teaching Hospital (UCTH); however, the nurses and doctors refused to examine her with an excuse that they are on strike.

“We assisted her from UCTH to the General Hospital ,Calabar, yet the same excuse and finally, we took her to the Navy Hospital at Highway, where she was confirmed dead.”

A woman who claimed to be a sister to the deceased, Mara Mara lamented the avoidable death of her sister, “This is nonsense….those doctors and nurses are inhumane and will pay for her (Miss Chukwueke) life.

“The same way they chose their work’s principles in disregard to a person’s life, that’s the way it’d be for them except they ask GOD for forgiveness.”

“If they knew they were on strike, they wouldn’t have opened that day and my sister would have lived – because they would have first of all rushed her to other hospital (s) that were opened and ready to attend to her for the day.

“I wonder why the hospital will be on strike while the school is not; when the most important infrastructure needed at the school is being cut off, what do we expect?” Mara fumed.

The Association of Resident Doctors, ARD-UCTH chapter had embarked on an industrial action on the 18th of March, 2019. The ARD-UCTH strike which has entered its 20th day was as a result of non-payment of salary arrears from 2014-2016.

“The strike will continue indefinitely until our request is met”, according to a communiqué, ARD-UCTH/Vol. 025/03/071, signed by the President and Secretary, Imoke Echang and Ucheji Okechuchwu in March.

Reacting, the Chief Medical Director (CMD) of UCTH, Prof. Thomas Agan said that the money in question has been approved for release with a view to paying the arrears.

“The money has been approved by the Federal Ministry of Finance for the payment of the arrears. ‘The doctors will be paid this week, needless of them embarking on the strike,’’ Agan said.