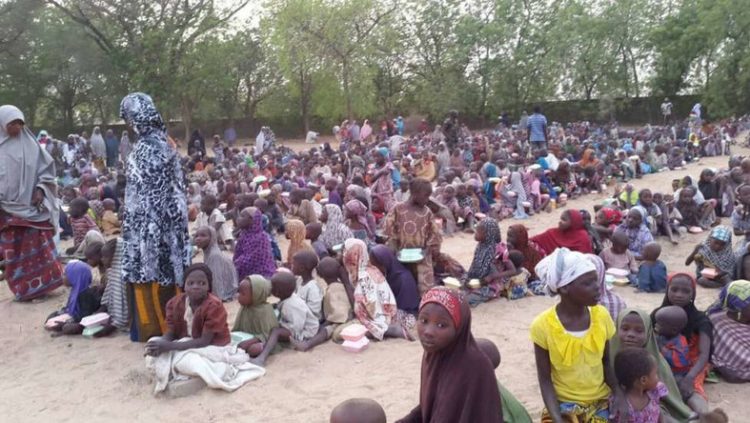 Intense hunger, as a result of inadequacy of food, in an Internally Displaced Persons (IDPs) camp on the outskirts of Bauchi, has forced adolescent children to feed on onion leaves for survival.

Correspondents of the News Agency of Nigeria (NAN), who visited the camp, located about two kilometres from Rindebin community, in Bauchi Local Government Area, reported that the children, between the ages of three and five, looked pitiful as they consumed the leaves.

Some of their parents interviewed said there weren’t enough food, as such they had to ‘improvise’ ways of tackling hunger,” because they believe “onion leaves are nutritious” and would also protect their children from hunger and diseases.

One of the parents, Mrs. Aisha Musa, said for in the last one year, “children and adults in the camp have been struggling to survive, with little or no assistance from all quarters.”

Another parent, Mrs. Ajidda Ahmed, said the hardship is enormous, and added that most of them have given up any hope of living a normal life.

“Adults and children suffer from hunger; this has resulted in forcing us to eat raw onion leaves from sellers who come into the camp.

“The rainy season is about to set in and another fear is the outbreak of childhood diseases because, for the past one year, our children were not immunised and there are no water, sanitation and hygiene facilities

“We defecate in the bush and the rain water will soon wash our faeces back to the stream, where we source for water to drink,” she lamented. NAN also observed that children under two years in the camp were already showing symptoms and signs of malnutrion.

One of the leaders of the IDP camp, Mr. Bulama Gojja, claimed there are over 200 Shuwa-Arab from Marte, Marfa and Jere local governments of Borno State, and that they wereforced to relocate to the camp last year, as a result of Boko-Haram activities.

Gojja enumerated their challenges to include insufficiency of food, lack of potable water, health facility and education for their children.

He said that in 2018, no fewer than 20 pregnant women delivered in the camp without the required medical attention, and expressed fear that their off-springs might develop health challenges; due to lack of immunization.

He lamented that in spite of their efforts at drawing sympathy over their plight, assistance has not been forthcoming from any quarter.

The leader therefore solicited for assistance from both government and non-governmental organizations, particularly in the areas of health, education, potable water and agriculture inputs like fertiliser, seed and herbicides to enable them engage in farming.

Efforts by NAN to speak with the appropriate state government agencies and some non-governmental organisations on the matter were not successful as those who were supposed to speak on the issue were said not to be seat each time NAN visited.