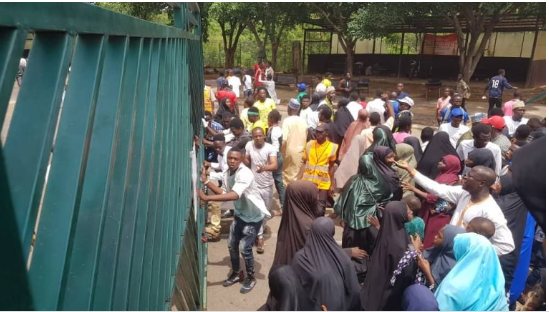 Some members of the Islamic Movement in Nigeria (IMN) broke into the premises of the national assembly, forcing federal lawmakers to adjourn plenary.

The IMN members were said to have overpowered security operatives before breaking down the first gate.

Shouts of “Allah Akbar” rented the air after the aggrieved protesters gained entry into the complex.

They advanced towards the second gate, which lead to the chambers but were stopped by their leaders who appealed to them not to proceed further.

At this point the policemen who had fled also joined to make entreaties to the mob.

The protesters demanded the continued detention of Ibrahim El-Zakzaky, their leader.

Yusuf Lasun, deputy speaker of the house of representatives, who was presiding over plenary, announced that he had just been briefed of the development before the lawmakers adjourned.

He said he chose to adjourn plenary out of caution.

Security has been beefed up around the the legislative chamber.

During a procession in commemoration of Zakzaky‘s 68th birthday, the IMN members threatened to change their style of protest.

Zakzaky has been in the custody of the Department of State Security (DSS) since December 2015.

He is currently facing trial over “culpable homicide, unlawful assembly, and disruption of public peace”.