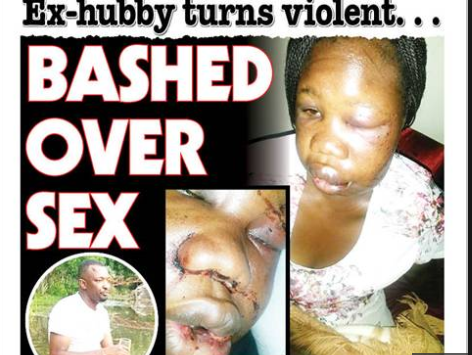 A man has been accused of beating his ex-wife after she denied him sex on a visit to see children. The accused identified as Simbarashe Gumbanjera is reported to have visited his ex-wife named Taremekedzwa Faith Dirwai, 34, but he changed his mission to demand sex on Good Friday in Zimbabwe.

He has since been arrested on accusations of assaulting his former wife.

Dirwai told H-Metro that she delayed in opening the door raising suspicion from Gumbanjera that she was with someone in the house.

“He knocked the door very late coming from Independence celebrations and he was angry since I had delayed in opening the door,” said Dirwai.

“He never asked to see the children only to ask for sex accusing me of accommodating another man. “We separated in 2017 when he left the family to cohabit with another woman in Goromonzi.

“He assaulted me after I denied him sex in front of our children; he never gives any support or bring groceries for the holiday. “Gumbanjera threatened to beat up the children if anyone of them shouted for help; neighbours arrived leading to his arrest.

“He calls himself untouchable claiming that he is connected to the prosecutors and magistrates at Goromonzi. “I was rushed to Parirenyatwa Hospital where I received treatment,” said Dirwai.

The case was reported at Ruwa Police Station under RRB 3456295 and Gumbanjera is expected to appear in court this week.