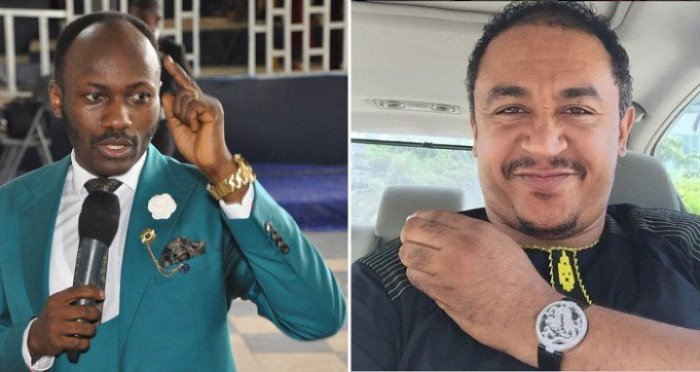 Popular and controversial On Air Personality (OAP), Daddy Freeze seems to have repented after his critic against the general overseer of Omega Fire Ministries International, Apostle Johnson Suleman for acquiring a private jet.

The OAP and founder of the Free Nation movement took out time to explain the relationship he has with the Clergyman.

His statement on his relationship with Apostle Suleman comes after he had attacked the man of God for acquiring a private jet rather ‘than helping the needy in his congregation.’

In his earlier critic, Daddy Freeze had challenged the man of God to reveal the total number of persons he had helped so far in his ministry.

“Please, how many poor people in your church are you helping? I need a response, thank you.”

While making a U-turn, Daddy Freeze explained his relationship with Apostle Suleman, saying that they were not sworn enemies as many people thought.

According to him; “A lot of people are of the opinion that Apostle Suleman and I are sworn enemies. This couldn’t be farther from the truth.

“Most people are unaware that we are actually quite close and speak very often, sometimes as often as 5 to 6 times a week.

“So why then did it seem like I called him out over his private jet issue?”