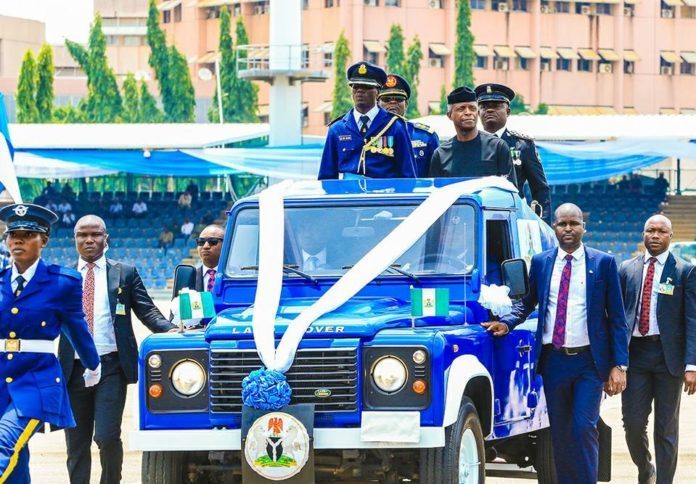 The Vice President made this comment at the 2019 NAF Day Celebration on Monday, April 29.

The vice president said the military must continue to serve with excellence because Nigerians expect them to operate exceptionally.

Osinbajo tasked the armed forces on employing more technology and innovative techniques in tackling insecurity across the nation, urged the various arms of the military to seek better ways to cooperate while maintaining the healthy spirit of competition for effective handling of the security issues besetting the nation.

The statement which was issued by Laolu Akande, his Senior Special Assistant on Media & Publicity reads in full: “I am delighted to be in your midst today to celebrate the Fifty-fifth Anniversary of the Nigerian Air Force, established in 1964 by an Act of the Nigerian Parliament to preserve Nigeria’s territorial integrity through the employment and projection of air power. I am proud to say that the Airforce has in the years since its establishment proved its mettle both locally and internationally.

“I must say that I am impressed by the displays put up by the officers, airmen and airwomen of the Nigerian Air Force at this ceremonial parade: in the march-past and parade, and especially in the aerial exhibition. These displays aptly demonstrate the Nigerian Air Force’s commitment to achieving high standards of operational readiness. Indeed our Air Force is Willing Able and Ready

“I would like to commend the Chief of the Air Staff and his team for the commendable leadership they have shown in providing for the Nigerian Air Force. As the air arm of the armed forces, the Nigerian Air Force has shown that despite its challenges, in terms of quality of manpower, talents, creativity and capability, we stand shoulder to shoulder with any Air Force in the world.
As a country, we are particularly proud that in less than 4 years, we have been able to revitalize our armed forces for the full restoration of Nigeria’s territorial integrity.

“As you may recall, in the President in his inaugural speech promised to put an end to the Boko Haram insurgency. In fulfilling the promise, as Commander in Chief of the Nigerian Armed Forces, he prioritized the restoration of professionalism in the military, to enable them effectively discharge their responsibilities.

“Substantial investments have been made in acquiring new platforms and other support equipment for the military and other security agencies, as well as in reactivating and upgrading existing platforms. In the last four years, the Air Force has acquired and reactivated several aircraft, which are now helping make a difference in the various theatres of engagement across the country.

“In addition, the procurement process for military “hardware has been reviewed, to remove inefficiency. In 2018, through a transparent, first-of-its-kind Government-to-Government deal with the United States of America, we concluded the procurement process for the delivery, in 2020, of a dozen Super Tucano aircrafts, which will no doubt be game-changing for Nigeria’s air capabilities.

“I must also highlight the renewed focus on research, innovation and self-reliance by the Chief of Air Staff. This is farsighted. It is also an important component of the development of a Military Industrial Complex for Nigeria and the Armed Forces in general. I am pleased to note that we are seeing an Air Force that is increasingly confident about its ability and capacity to innovate and to deploy locally developed technology.

“This is manifesting in various ways, from the locally-developed operational Unmanned Aerial Vehicle, TSAIGUMI, which the President formally inducted into service in February 2018, to the collaborative work being done at the Air Force Research and Development Centre in Kaduna to produce the first-ever made-in-Nigeria aircraft.

“Of course, this must be situated within the general context of a greater emphasis on local capacity-building by the Nigerian Armed Forces, with developments like the establishment of a Nigerian Army University and the revitalization of the Defence Industries Corporation of Nigeria (DICON) serving as testaments to this renewed emphasis.

“Once again, I salute the resolve of our Armed Forces and the invaluable contributions of other security agencies in fully containing the security challenges in some parts of the nation. Especially, the contributions of the Nigerian Air Force in addressing the security challenges of armed banditry, cattle rustling and kidnapping in the North West and North Central. Your efforts in conjunction with other security agents have started to yield positive results. As we provide new platforms for you to carry out your constitutional roles, Nigerians expect nothing short of exceptional service delivery from you.

“I, therefore, charge you to continue to work to earn the confidence of the nation and the respect of the international community, in terms of protecting lives and property, and degrading and neutralizing all existing and emerging national security threats.

“I would like to urge greater cooperation and mutual trust between the various arms of the Armed Forces, even while maintaining the healthy spirit of competition that underpins innovation and increased efficiency.

“The Nigerian Air Force should also strive to expand its collaborations outside of the military – by this, I mean collaborations with academia, think tanks, civilian technology hubs, and independent innovators and creators. I am aware, with discussions with the Chief of Air Staff that collaborations with our universities and research institutes are already underway.

“There is a great amount of potential waiting to be unleashed from these partnerships. Earlier this year, young interns working at the Federal-Government-supported North East Humanitarian Innovation Hub in Yola, hit an important milestone in their work. They developed, through 3-D printing, a fitting prosthetic arm for a former Policeman who lost his arm while in service. This was an exceptional innovation because all of the material used and all of those involved in it are from Adamawa State.

READ  How can 6 Division of the Nigerian Army HIRE Protest Consultants?

“Across the country, hubs like these – several of them supported by the Federal Government are doing exciting things and exciting ground is being broken, and there is no reason why the Armed Forces should not be a part of the story.

“Distinguished guests, Ladies and Gentlemen, these remarks would not be complete without acknowledging the roles played by the Nigerian Armed Forces in the just-concluded General Elections. I am aware of the efficient movement by air of electoral materials, and the aerial surveillance conducted by the Nigerian Air Force which contributed to the success of the elections. I, therefore, commend the Armed Forces and other security agencies on a job well done.

“Finally, let me thank Nigerians for coming together as a united and determined people, irrespective of political and ethnic affiliations, to wage war against terror and insurgency.

“We are currently in the stabilization, reconstruction and resettlement phase of the overall effort in the North East, and we will continue to solicit your support and understanding until terrorism is completely eradicated. We will not relent until every troubled spot within our borders enjoys enduring peace and order.

“I once again congratulate the Chief of the Air Staff and the entire Air Force family on the occasion of the 55thAnniversary of the Nigerian Air Force.

“I thank you all for listening,” the statement added.