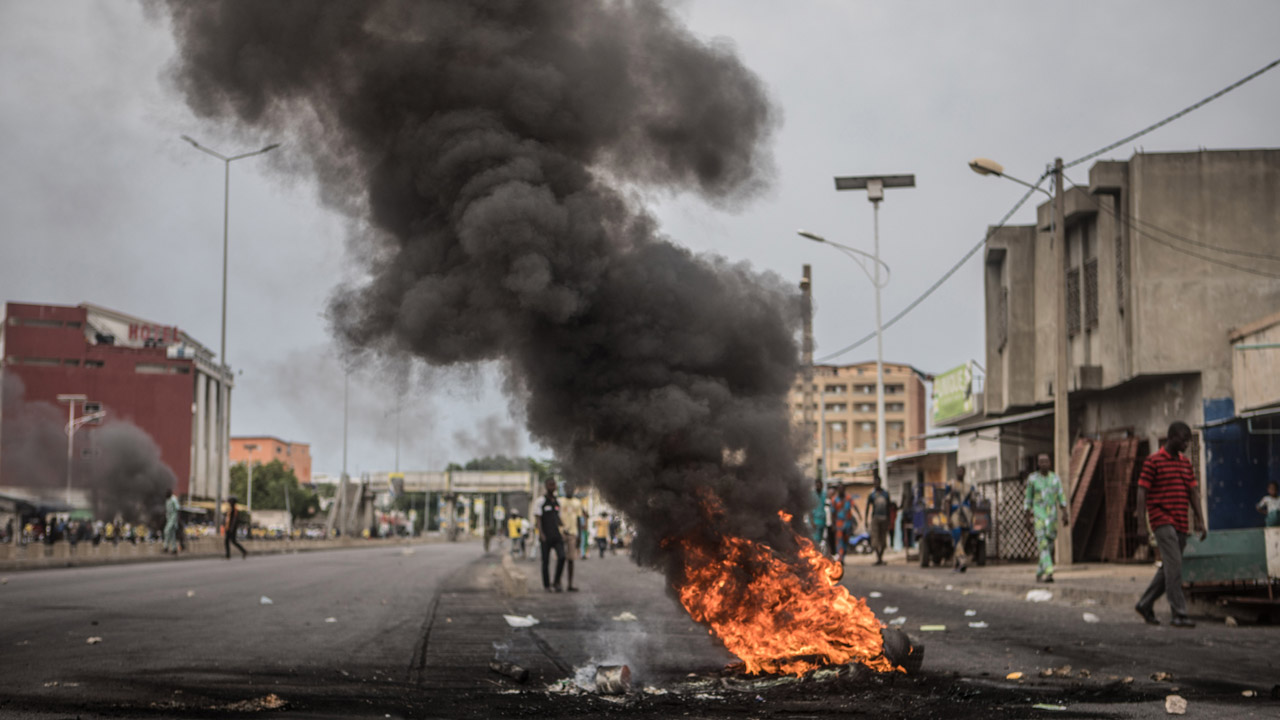 Hundreds of protesters in Benin manning burning barricades defied police and soldiers Thursday after violence broke out following controversial parliamentary polls held without a single opposition candidate.
A woman died on Thursday after being wounded the day before, medical sources said, and a man was brought to the hospital with a gunshot wound in his back.

Hours after initial results showed a record low turnout in Sunday’s election, soldiers and large numbers of police deployed on Wednesday across the economic capital Cotonou.

Supporters of former president Thomas Boni Yayi, who had led calls for a boycott of the ballot, took to the streets.

Gunshots
Protestors have torched businesses, hurled stones, and smashed the windows of government buildings. Police fired tear gas to break up crowds, and protestors tried to throw some canisters back.

On Thursday, they continued protests for a second day.

“Nobody has slept,” said one demonstrator on Thursday morning, who gave his name as Justin B.

“Around 10 p.m., they cut the light and fired live ammunition,” he claimed, pointing to two empty bullet casings and bloodstains on the ground.

In the Cadjehoun district of Cotonou, where Boni Yayi’s house is, a resident also reported to have heard shots fired.

“We do not know at all what will happen now, but we feel that it is bad,” said one woman, but added that it still felt safe enough for children to go to school on Thursday.

Interior Minister Sacca Lafia said security forces had been ordered onto the streets to stop protests but called reports they were trying to arrest Boni Yayi “fake news.”

Factory burned
Violence was also reported in the town of Kandi, some 620 kilometres (385 miles) to the north, where one of the country’s largest cotton factories — a sector in which President Talon made his fortune before embarking on politics — was set on fire.

“Protesters set the factory on fire in the evening, we still have no idea of the damage but they are huge, everything burned,” said a firefighter.

The small West African state was held up as a model for democracy, but the situation has raised warnings from civil society and rights groups inside and outside Benin.

On the day itself, more than three-quarters of the country’s five million registered voters stayed at home.

Just 22.99 percent of registered voters cast the ballots, according to preliminary results.

Turnout had previously never dropped below 50 percent since the country’s transition to democracy in 1990.

Following the vote, Boni Yayi and Nicephore Soglo, president from 1991-1996, spoke out against the election.

“The people demand the return of democracy,” Boni Yayi told reporters on Monday, calling on people to resist the current president. “Talon will walk over our dead bodies.”

The situation has raised warnings from civil society and rights groups inside and outside Benin.

Amnesty International, speaking before voting, said that a “wave of arbitrary arrests of political activists and journalists, and the crackdown on peaceful protests” had reached an “alarming level.”