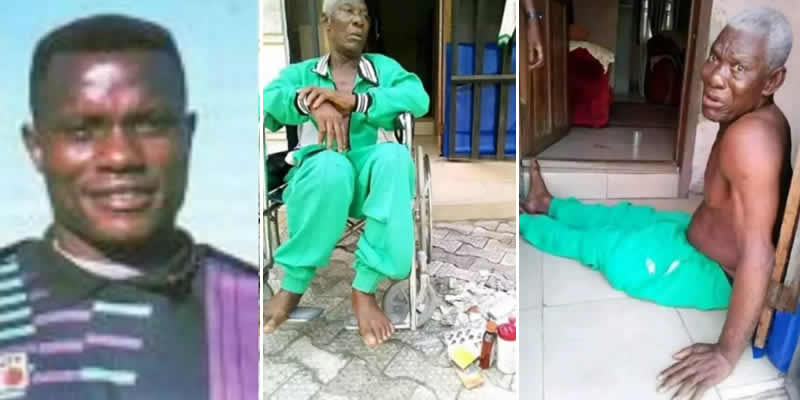 Photos have emerged showing the condition of a former Nigerian goalkeeper, Peter Fregene who is currently battling an illness yet to be disclosed.

A former goalkeeper who won the Nigerian FA Cup with both ECN and Stationery Stores, Peter Fregene now finds it difficult making use of his legs and currently moves around with the aide of a wheelchair.

Fregene was born in Sapele and played club football for Lagos rivals ECN and Stationery Stores F.C. during his career that spanned the 1960s, 1970s and 1980s. Meanwhile, Commissioner for Sports, Josef Udedi earlier revealed that NFF was desirous of improving the welfare of ex-internationals.

He said that one of the objectives of the proposed NFF Foundation was to build a database of every player that represented the country whether in the past or in time to come.

Otedola’s offered to foot the bill of the former captain of the national team following reports that he was battling with prostate cancer.

The $50,000 cheque was presented to Chukwu on Wednesday morning in Enugu by Philip Akinola, the COO of Zenon Petroleum and Gas Ltd, one of Otedola’s companies.