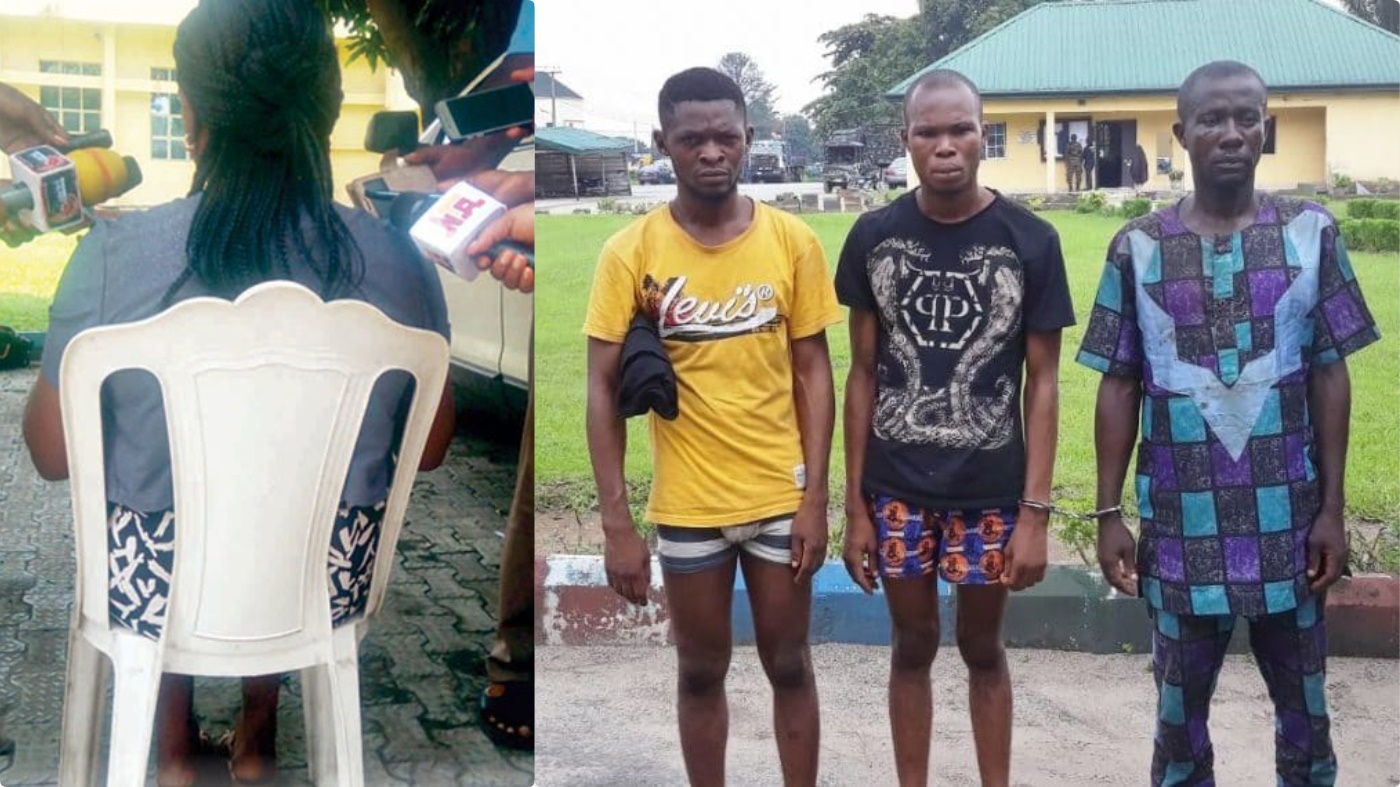 A female senior lecturer (name withheld) in one of the tertiary institutions in Rivers State, has given graphic details of how she was abducted by three kidnappers, raped by one of them, in the forest of Emohua Local Government Area of Rivers on April 30th and how she miraculously escaped from the kidnappers’ den.

The female lecturer who is married, told her horrific story at the 6 Division of Nigerian Army, Port Harcourt where her abductors were paraded before newsmen. The victim, who was accompanied by her husband and a female relative, said;

I was in my house in Port Harcourt on April 30, 2019. I was alone with my children and my husband’s cousin. They were sleeping in the room. I was washing with machine at the balcony. Since it was around 8 p.m., there was a programme I always watched on Zee World.

“As I was washing my clothes, I was watching the programme. The main gate was locked, but the protector was open, since I had to go downstairs to get water.

“I was in the living room, when I noticed that the protector opened slightly. I was wondering, because if my husband returned from work, he would horn and I would have to go and open the main gate for him. I was wondering who was there. The other person who was supposed to come back from work was sleeping. The next thing I saw was the key to the main door opened.

Then I saw two guys first, pointing a gun at me. One of them cocked the gun and he asked after my husband but I said he had not closed from work. He then angrily asked why he had not closed from work at that time. I told him I wouldn’t know. He asked me to cooperate otherwise they would finish me, saying they were not playing with me. He asked of my ATM card and PIN. I gave him. He asked if I had money in the house I said no but I had gold, which could be sold for N50, 000 but they rejected it.

“One person took our television, another took the laptop. I was tying a wrapper with spaghetti top since I was in my house. They then asked me to follow them. One of them asked me to get a dress but they did not let me leave the living room. The dress I wore to school that day was on my room’s door. They brought it for me and I wore it.

“They asked of my car’s key, I brought it out and I gave it to them. That was how they put me in my vehicle and as they were about to drive out, they found it difficult because of the space we share with our neighbour and they were hitting my neighbour’s fence. My neighbour came out and I said I was in trouble. Maybe he did not see me. The kidnappers put my head under the car’s seat and they drove off. I did not know the direction they followed. We then got to a place that was not motorable. So, we had to come down. That was how we started the journey inside the bush. I asked them what I did but they did not respond.

“That day, they paid me salary. I told them to let me give them the salary that was transferred to me. One of them then gave me an account number, which I forwarded my salary N59, 000 to. As we were still going inside the bush, he called someone to confirm if the person had received the alert. We later saw river that got to my knees. The leader pulled his trousers but I had to carry my dress up. That night, we spent about two hours in the bush, just moving around and I was barefooted because they did not allow me to wear slippers, thereby giving me injuries. They later blindfolded me and we got to a place where they said that was where we would stay that night. I slept on bare ground in the open forest.

“The next morning, out of the two of them that followed me inside the bush, one of them left, remaining one who told me that if I did not cooperate with him, to allow him to sleep with me four other persons would come in the afternoon and they would have me. But if I allowed him to sleep with me, he would let me go. I told him I would not be able to do it. When I was still sitting on the floor, he masked himself with his dress and he raped me. Later in the afternoon, I stood there and I cried. If I shouted, I would not have received help. It was indeed a bush although I could hear the sound of passing vehicles.”

When it rained heavily, we were all under the rain. I was completely wet. They removed their clothes and had only their boxer shorts. After the rain, they cleaned themselves and wore their clothes. That was the only dress I had and I could not go naked. I was so cold. Later in the day, another one came and he asked me if I would eat but I said I was not hungry. He said I should eat in order not to die in the forest. He said if I died, they would still collect the ransom. They later brought packed food: fried rice with two fried meat and sachet water with orange juice for me but I could not eat because I did not have appetite. I just managed to take the sachet water and the two pieces of meat.

“The elderly one that came seemed nicer. He said they would never rape their victims but I told him the other one had already raped me. He was surprised and went back to ask him. He confirmed raping me. He said in their culture, it was forbidden and that before they would let me go, they would do something. I told them I am a Christian and I would not be part of it. I said I had forgiven him and left him to God. He said when they got to our house and if they had seen N500, 000, they would not have carried me. He said teachers’ money (ransom) was N5 million, but if my husband could raise N3 million, they would let me go. Around 7 p.m. on Wednesday, they asked of what I would eat but I said I was not hungry but I asked them to call my people.

“They then called my husband, but he was calm and he said he had no money again since they had collected the over N100, 000 he had with the ATM card. That was when I knew that they had collected the money. I begged them to let me go but they asked me to shut up, claiming that I was talking too much. When they noticed that I was very cold, they said they would take me to where I could warm myself. We then went further into the bush.

“In the place, it was like a shed with fire place. We slept on three benches overnight. Early the next morning, we left the place. As we were about changing location, one of them said he was not comfortable with where he was going and to go back to where we were. We then went back to where we were on Wednesday. While we were there, I had strength and I knew that members of my church were praying for me. I knew that my God would not let me down.

She concluded by saying:

“I told God that after all my suffering, the kidnappers would not take the requested N3 million from my husband. They said my husband promised to call them before 12 noon on that day to drop the ransom. So, they were happy. One went to sleep, while the other took his phone and went away. I waited for a while, the one that went to make call was not coming. I did as if I wanted to urinate, the one that was sleeping did not ask me to come back. I saw it as an opportunity to escape. That was how I ran away. God helped me in the bush and I was following the sun but I was seriously injured and bleeding. I later came out of the bush and I saw a road. I did not know where I was. I was stopping vehicles but the dress I wore was so dirty. So, no vehicle was stopping for me. I then saw two guys in a vehicle, they helped me”.