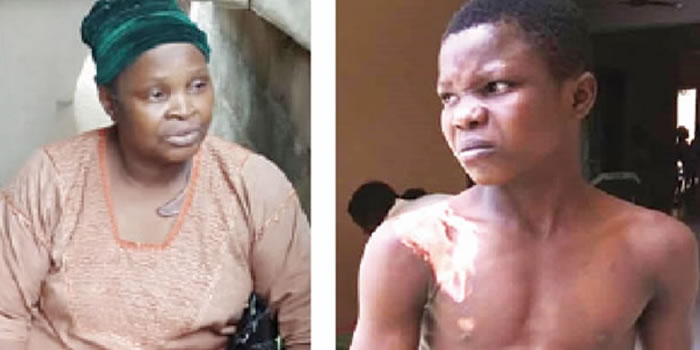 The Lagos State Command of the National Agency for the Prohibition of Trafficking in Persons has commenced investigation into the alleged torture of a 14-year-old boy, Segun Kushadi, by his aunt.

The woman, who is identified simply as Mrs Olofinlade, reportedly scalded Kushadi’s shoulder with hot water for using a bad pot to heat the water The victim lived with Olofinlade on Aderele Street, Egbeda, Lagos.

City Round gathered that the woman had subjected the boy to abuse since he was brought from Ogun State by his father to live with her.

It was said that a good Samaritan saw Segun on the street with the burn and prodded him on the cause.
The resident was said to have reported the case to a human rights organisation in the state after the boy revealed his ordeal to him.

A source told City Round that the woman was arrested by the police, but was released on the same day. He said, “The boy has been living with Mrs Olofinlade for about one year now. Since then, she has been maltreating him over any slight provocation. On April 25, 2019, she asked him to boil water in the morning which he did. .

“Due to the fact that they didn’t have a kettle, he asked her which pot he should use and she told him to use any pot. When the water had boiled, she asked him to bring it.

On seeing the water, she flared up, asking him why he used a certain pot. The boy kept quiet, and the next thing, she carried the pot and tossed the hot water over his body. “With the assistance of the human rights group, she was arrested by the police. Unfortunately, they released her that very day and warned her not to beat the boy again.”

The source added that earlier on the day of the incident, Olofinlade had beaten Segun while he was washing clothes.

However, Olofinlade while speaking to punch correspondent on the telephone on Thursday denied pouring hot water on her cousin.

She stated, “Segun is like a son to me. He is not an outsider. He poured the hot water on himself. If anybody tells you that I poured the water on him, the person is my enemy. The pot that I warned him not to use was the one he used.