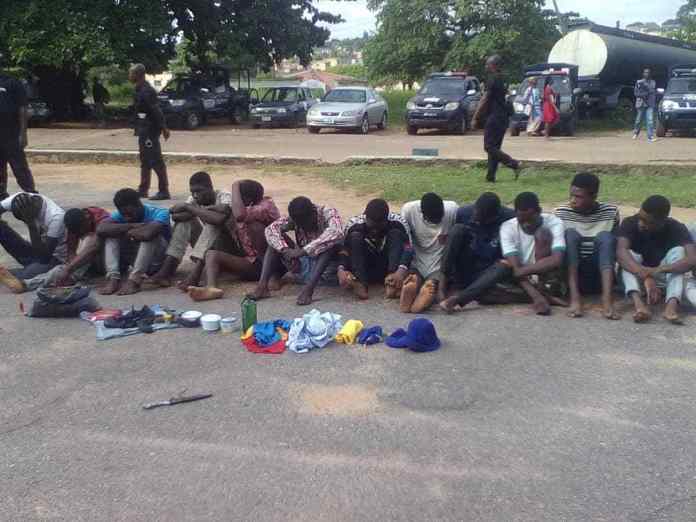 Oyo State Police Command on Monday in Ibadan paraded above 30 suspected criminals arrested for offences ranging from armed robbery cases, unlawful possession of firearms and ammunition, cultism and kidnapping, among others.

CP Olukolu added that 13 suspects were arrested for cultism from various higher institutions in the state, namely Oke Ogun Polytechnic, in Saki, The Polytechnic, Ibadan, and Landmark University among others.

He stressed that 1 suspect was also arrested for unlawful possession of firearms from Saki/Ogboro village, while 3 other suspects were arrested for kidnapping in Igbo – Ora Area.

The Police Commissioner stated that upon a tip off received by the Special Anti Robbery Squad that some notorious members of a secret confraternity who had been inflicting various acts of violence and criminal activities on members of the public in Saki town and other areas in Oke-Ogun axis of Oyo State, the SARS operatives headed by CSP Olusola Aremu quickly went to the area and apprehended them, adding that 10 of the 13 members of the cult group later confessed to be a students of various higher institutions, while the other three suspects were artisans.

“Seven out of them were students of The Oke-Ogun Polytechnic in Saki, Oyo State, and the other three were from Landmark University, University of Ibadan (UI), and National Open University of Nigeria, respectively.” he said.

Speaking further, CP Olukolu attributed the achievement of the Oyo state police command to the corroborative support the command has been getting from the community and members of the public with effort of intelligence led policing.

He emphasized that these achievements comes with the help of “revamped vehicular patrol, and the launch of operation ‘puff adder.’

CP Olukolu however appreciated the support of Governor Abiola Ajimobi particularly the donation of 2 patrol vehicles, 60 bullet vests, and 40 helmets which according to him will aid in smooth operations of the command activities.

He therefore thanked the people of Oyo State for their support and urged them to keep providing useful information that will help the police to carry out their constitutional responsibility as entrenched in the law.