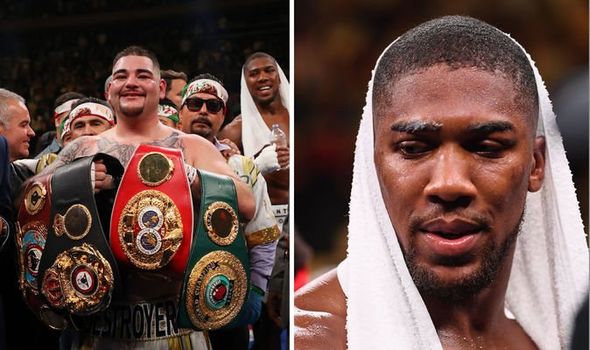 Joshua, 29, was floored four times as Ruiz defied underdog status to win in seven rounds and deliver a true shock to the sport at Madison Square Garden.

He said: “It’s a test of character. I’ll see what is next and move on,” BBC reports.

Promoter Eddie Hearn said a rematch is a “must win” because Joshua’s options will be “nothing after that”.

A rematch clause was part of the contract and Hearn said he expected it to take place “in England in November or December”. Ruiz himself says he will take the contest at any time.

Joshua had a concussion test after falling to a first defeat of his 23-fight career against a man who took the contest at short notice when original opponent Jarrell Miller failed drugs tests.

After scoring a third-round knock down, he was floored twice before the end of the round and put down twice more in the seventh before the bout was waved off.

Sitting alongside Joshua at a post-fight news conference, Hearn said his fighter will want the repeat fixture more with “every day that passes”.

He added: “Winning is everything. I am not going to sit here and say ‘losing is fine’. Not in my book. But if you do happen to lose, adjust and bounce back. But I do not condone losing in any form. This is war, battle, so what’s next?”

“I still want to compete with those men but a rematch with Andy Ruiz Jr is where we are at,” he said. “I’m still a champ and I will rectify it to get the belts back.”

Hearn said Joshua got “sloppy” and expects the defeat to “devastate” his fighter, adding Ruiz had pulled off “one of those big upsets in heavyweight history”.

Much had been made of Joshua competing in the US for the first time, with hopes high he could land an eye-catching win that would build his profile in the country.

He was priced at 1-25 with bookmakers, with many pundits expecting Ruiz to struggle to make it past the opening few rounds.

“It was a new environment and that is a factor but he should be beating Andy Ruiz,” added Hearn.

“AJ must win that rematch in the UK because there is nothing after that.”

‘I am still pinching myself’

Ruiz warned he will be “more motivated as a champion” and vowed to take the rematch at “any time” after turning the heavyweight division on its head.

In becoming Mexico’s first world heavyweight champion he now holds three of the four major belts, with Wilder in possession of the other.

Journalists threw names like James ‘Buster’ Douglas – who upset Mike Tyson in 1990 – and Hasim Rahman – who beat Lennox Lewis in 2001 – at Ruiz, who simply said: “I am still pinching myself.

“I wanted to prove everyone wrong, all the doubters, I was looking at comments.

“I am trying to make a legacy and a big name for myself.”

Ruiz, who started boxing aged six, told media during fightweek he considered giving up because of criticism of his body shape.

At 268lbs, he was the heaviest opponent Joshua has shared a ring with but it was the Briton who looked physically drained early on in the contest.

Joshua never recovered after being floored twice in the third round, knock downs made more impressive given Ruiz had been dropped with a left hook moments earlier.

“It was my first time down,” added Ruiz. “I was like ‘what the hell just happened?’

“I think it was the Mexican blood in me. I had to return the favour.

“The way that I look, the extra flab I carry. Now I want to get in real good shape and look like a Mexican Anthony.

“Follow your dreams, if someone puts you down don’t listen, just keep working like I did. We just made history.”