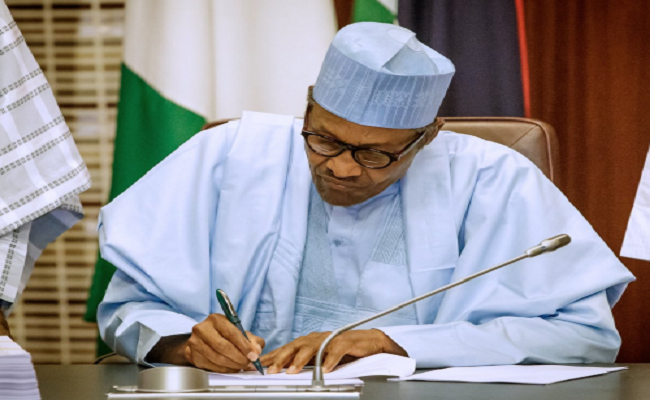 The President also approved the dismissal of 37 SARS operatives and prosecution of 24 other police officers for violations of citizens’ rights and abuse of office.

He also approved the renaming of SARS as Anti-Robbery Section.

President Muhammadu Buhari urged operatives of the Nigerian Police Force to ensure that they at all times act within the ambit of the law and must not violate the fundamental human rights of Nigerians whom they have sworn to protect.

The President also underscored the importance of Police reforms and repositioning as a major policy thrust of his administration geared towards improving Nigeria’s internal security.

President Buhari spoke at the State House on Monday when he received the report of the Presidential Panel on SARS reform, which was constituted as a result of public outcry and various media reports on allegations of human rights violations perpetrated by officers and men of the Special Anti-Robbery Squad (SARS).

He said where the rights of Nigerians are violated by Police officers while discharging their functions, the government has a responsibility to address the instances of violation in line with its human rights obligations and ensure that such Police officers are held accountable for their actions.

The President noted that the decision to constitute the membership of the panel from the National Human Rights Commission, NHRC, was in recognition of the fact that the decisions, determinations, and recommendations of the commission are binding and enforceable as provided under section 22 of the NHRC act, 1995 (as amended).

President Buhari commended the panel for a job well done in carrying out a presidential directive, adding that his administration would continue to give the NHRC all the support required to ensure full implementation of the recommendations contained in its report.

The seven-man presidential panel on SARS reform is chaired by Anthony Ojukwu, who is the Executive Secretary of the National Human Rights Commission.

Some of the other key recommendations of the panel include:

A. Signiﬁcant improvement in the funding, kitting and facilities of Nigeria

B. Strengthening information and communication technology of the force;

D. Institutionalizing a special investigation panel to annually hear and

Police and other internal complaints mechanisms of the force to make

The intelligence arm of the police from the divisional, area command, state

Command, zonal command up to the force headquarters level. This will

Also, remove the stigma presently associated with the name SARS;

9. Ensuring the SARS limits itself to tackling armed robbery while other

Intelligence and operational units are strengthened to perform their