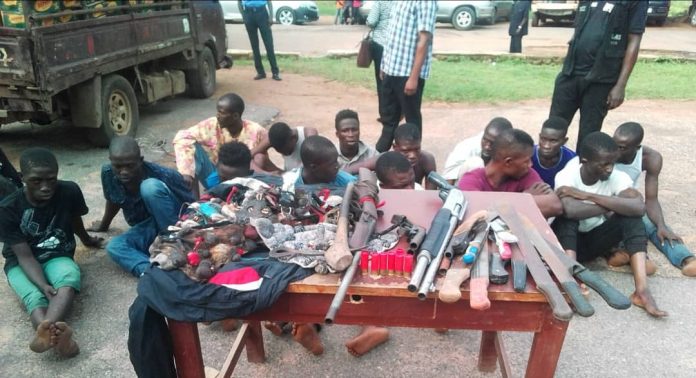 29 members of the National Union Road Transport Worker NURTW Monday paraded by Oyo state police Command for alleged disturbance of public peace and tormenting trouble during the inauguration of Eng Seyi Makinde on May 29.

The state commissioner of police, CP Shina Olukolu, while briefing the press on the development disclosed that the Police, Military and State Security Services (SSS) arrested 15 hoodlums identified as members of the National Union of Road Transport Workers (NURTW) and recovered One Axe, series of criminal charms and other weapons in the process of conducting search at the entrance of Obafemi Awolowo Stadium

He explained that a follow up arrest was made during the inauguration in which a team of Counter Terrorism Unit (CTU) attached to the state command and detailed across the city, accosted 14 suspects and recovered 3 guns, 7 live cartridges, Criminal charms and other harmful vices.

While accessing the General Crime statistics of Reported and Prosecuted cases between 1st of January, 2019 to May 2019, National Insight News gathered that 3720 cases were brought before the table of the Oyo state Police command which led to the arrest of 5472 suspects while 3052 of the suspects were charged to court.

In his season greetings message to the Muslim faithfuls, the Commissioner maintained that the command is conscious of the possibility of increase in crime rate often associated with festive period but assured the good people of Oyo state that the command is working round the clock to put a robust plan that would guarantee security of life and property before, during and after the forth-coming Eid-el-fitr celebration in the state.