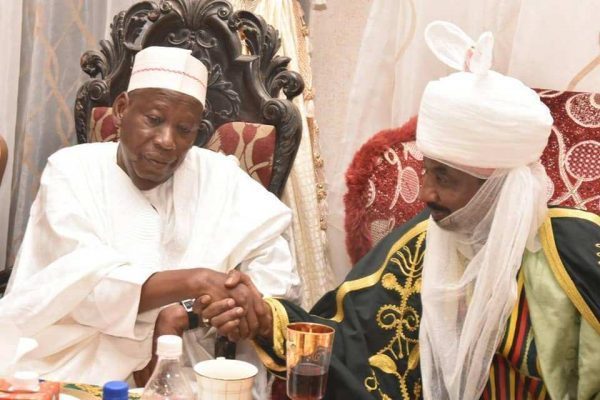 Embattled Emir of Kano, Alhaji Muhammadu Sanusi II on Saturday, replied to a query given to him by the state government over an alleged misappropriation of N 3.4 billion belonging to the Emirate Council.

This is just as a committee comprising Alhaji Aliko Dangote and Governor Kayode Fayemi, of Ekiti State, intervened in the feud between the emir and the Kano State governor, Dr Abdulahi Ganduje.

According to the letter dated June 7, 2019 and signed by the acting secretary of the Kano Emirate Council, Abba Yusuf, Sanusi “could not have been culpable in the alleged fund misappropriation since he was neither the accounting officer not the council secretary.”

The acting Secretary further disclosed in the reply to the query that as of the time Sanusi was installed as emir in 2014, the Emirate Council had only N1.89 billion, an amount far less than the N3.4 billion allegedly siphoned between 2014 and 2017.

The letter read in part: “You may wish to note that at the time his Highness, Muhammadu Sanusi was appointed Sarkin Kano, the exact amount in the account of the Kano emirate council was N1 .893, 378, 927.38.

“It is also important to note that his Highness Sarkin Kano is not the accounting officer of the emirate council but the secretary of the council.

“We thank you for the opportunity to respond to the various allegations contained in the report and accordingly give our responses as per the attached.”

Meanwhile, Kano residents have commended the reconciliation of Ganduje with the Emir in Abuja on Friday.

Some residents, who spoke with the News Agency of Nigeria (NAN), on Saturday in Kano, expressed satisfaction and appreciation with the reconciliation.

According to some of them, the reconciliation is in the best interest of peace in the state and the nation.

Dr Abba Ahmed, a retired civil servant in the state, said the reconciliation provided much relief to many residents.

“I have been tensed since the issue started, especially that I live close to the Emirate where people have developed a high sentiment over the situation,” he said.

He explained that the situation was one of the few bad things that could happen to Kano, while commending the Dangote committee for the action.

Malam Nura Muhammad, also a civil servant, told NAN that the reconciliation was timely as it would save the whole of Northern Nigeria a lot of trouble.

“Kano has indeed become a centre for democracy not only in the North but in the whole country and many states look up to it for new political strategies.

“It’s also a hub for traditional influence where the Emirate plays a vital role in global affairs, while the Emir himself has attracted global attention, ” he said.

Malam Muhammad Ahmad, a businessman, said the reconciliation has saved Kano from shame because of so many uncertainties that could arise if the whole process had continued.

He urged residents to keep praying for more peace in the state and the country at large and avoid developing sentiments and enmities on political issues.

In another development, the state’s Police Command has banned any form of rally, demonstration, procession or assembly in the state until further notice.

The order was contained in a statement signed by the command’s Public Relations Officer (PPRO), DSP Abdullahi Haruna, released to newsmen in Kano on Saturday.

Similarly, he said, the command had withdrawn permission given to members of the public, civil society organisations, political parties, NGOs and other groups.

NAN reported that the order might not be unconnected with tension generated following the query issued to the Emir of Kano, Alhaji Muhammadu Sanusi II, over alleged misappropriation of N3.4 billion by the Emirate Council under his (Sanusi) leadership.

He explained that the action was necessary to prevent any threat, breach of the peace or break down of law and order in the face of various security challenges in the state.

He warned that any person or group of persons found engaging in any unlawful assembly would be arrested and prosecuted in accordance with the laws of the land.

“The Public should know the position of the state command in maintaining peace and order in the society,” the spokesman cautioned.

He therefore warned groups under whatever guise to adhere to the order until further notice or face the wrath of the law.