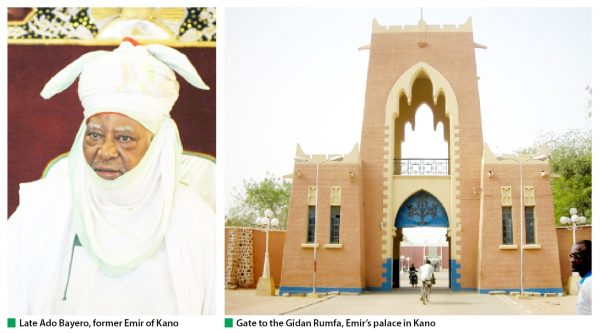 Thursday June 6, 2019 was exactly five years after the death of the late Emir of Kano, Alhaji Ado Abdullahi Bayero, who passed on on Friday, June 6, 2014 after a brief illness. To mark the anniversary, the Kano Emirate Council cancelled the traditional Hawan Dorayi, saying it was organizing a prayer session for the former emir in its place.

It was two days after the death of Bayero in 2014 that Malam Muhammadu Sanusi II was appointed the Emir of Kano by the then governor of Kano State, Dr Rabi’u Musa Kwankwaso, an appointment that raised dust, especially among heirs to the revered Kano throne.

The special prayer session for Bayero which held on Friday, June 7, was attended by many scholars, district heads, children of the late emir and other traditional title holders from within and outside the state.

Observed that from June 8, 2014 when Emir Sanusi took the reins as the Emir of Kano a lot of changes have taken place in the traditional institution, some of them so big that they completely altered the status of the Emirate and that of the Emir.

Emir Sanusi, after he assumed office, was able to revive the traditional Sallah durbars in the state after four years of suspension. It would be recalled that the late Emir Bayero had suspended all durbar processions in the state for four consecutive years due to ill health and Boko Haram insurgents that were active in Kano at the time.

Apart from reviving the annual durbar processions, Emir Sanusi also re-introduced one old tradition that was abandoned by the emirate for several decades, that is Rangadi. Rangadi is a special visit to other parts of the Emirate by the Emir and his entourage. During this visit, the Emir will lead his entourage to any district of his choice and spend a day or two there interacting with his subjects.

The Emir also reviewed the salaries of palace staff upward with a view to improving their wellbeing.

In what appeared to be a family tussle, the Emir was dragged to court by another member of the royal family, Alhaji Salim Abubakar Bayero, over alleged plan by Sanusi to demolish some historical structures in the palace, including Ka’iya and Kachako palaces and 13 thumbs of the past emirs. The purpose for the demolishing was to build offices of district heads and other staff. However, this case was later withdrawn by the complainant and the demolishing took place.

Emir Sanusi and Kwankwaso, Daily Trust on Sunday observed, have little misunderstanding on the issue of banning of begging in the state. The Kano State government had set up a committee which was directed to liaise with Kano State Hisbah Board to ensure smooth implementation of a ban of street on begging in the state. However, the Emir was said to have criticized this move, insisting that whoever decides to feed the less privileged can do so since it his personal money. His statement did not go down well with the state government.

It was after the Emir took on Governor Abdullahi Umar Ganduje, Kwankwaso’s successor, that both Sanusi and the palace started taking the heat, to the point that Kano Emirate is longer what it was five years ago.

Sanusi’s first quarrel with Ganduje stemmed from his criticism of the governor’s light rail project, which he said was not the priority of the masses, asking the government not execute it. He described the project as a misplacement of priority by Ganduje-led administration. The Emir’s comment generated a serious debate within and outside the state.

A battle line was drawn between the Emir and Governor Ganduje when Sanusi fired another salvo at a conference in Kaduna State and the state government reacted by making some moves that people interpreted as akin to initiating his dethronement. That situation was, however, saved after the interventions of Vice President, Yemi Osinbajo, Senate President Abubakar Bukola Saraki, Speaker House of Representatives, Yakubu Dogara, APC National leadership, two former heads of state, Ibrahim Badamsi Babangida and Abdulsalami Abubakar, respectively, as well as Alhaji Aliko Dangote and Alhaji Aminu Dantata, among others.

The animosity between the two appeared to have faded until Nigeria’s general elections early this year, when the relationship between the two leaders once again hit rock bottom over allegations about the Emir pitching tent with the opposition Peoples Democratic Party (PDP), in Kano.

This time around, the state government appeared not ready to take any prisoners as it orchestrated a move to balkanize the Kano Emirate through the state assembly, a move that scaled through with a lightning speed.

For the first time, the Kano traditional institution which has survived through centuries as an entity under a powerful ruler was reduced in status and significance to five emirates, each with its emir – just five years after the death of Ado Bayero who ruled it for over 50 years. A Kano State High Court has ordered the state government to suspend the carving of new domains and appointment of new emirs.

Also, for first time in the history of Kano, the Kano Emirate Council came under probe by a government agency over alleged financial misappropriation. The Kano State Public Complaints and Anti-corruption Commission is investigating the Emirate over alleged “questionable expenditure” to the of N4billion, The investigation was based on petitions to the commission by some friends of the Emirate, who accused the council of embezzling the amount within three years under the watch of Emir Sanusi.

This was followed by a recommendation to the state government by the anti-corruption agency to suspend the Emir and other officials of the council, so as to pave way for unfettered investigation.

The state government, on Thursday queried the Emir and demanded a reply in 48 hours. The move was seen as the last step preparatory to suspending the Emir. It was also the first time an emir of Kano was queried since the one issued Ado Bayero by the administration of Governor Muhammadu Abubakar Rimi in 1981, which led to riots in Kano and destruction of government property, as well as the killing of Rimi’s political adviser, Dr Bala Mohammed, who was burnt alive by a mob.

The fact that reports had it that governors and other prominent individuals are stepping in to prevent the Ganduje-Sanusi faceoff from getting out of hand will be praised by the people of Kano, even though their fingers remained crossed as they await details of the truce to know what fate it has in store for the new emirates.

“Learn to live with Sanusi”

Professor Haruna Wakili, a senior lecturer in the department of History in Bayero University Kano (BUK) and Director of Aminu Kano Centre for Democratic Research and Training, said the changes being introduced by the Emir were bound to happen from time to time.

“Leaders always like go extra mile to talk to people in power so that there will be reform. So, naturally a kind of Sanusi will never be quiet no matter what. No institution or organization can suppress him to be quiet. And as long leaders want to be relevant to their societies, they must do something to address the problems affecting their people and I think this is what the Emir is doing. Sanusi has no option but to speak out and tell the leaders the truth so that those in power can address the problem.

“Sanusi realised that the failure of the society is a failure of the intellectuals and he doesn’t want to belong to this group of people and that is why he is always talking. Sanusi has been like that even before he became emir and after becoming emir he has not changed. So, we should learn how to manage him. For me, if those in government think that removing Sanusi from office will suppress him, I think they are wrong. That man will be more dangerous outside the circle of government than within.”