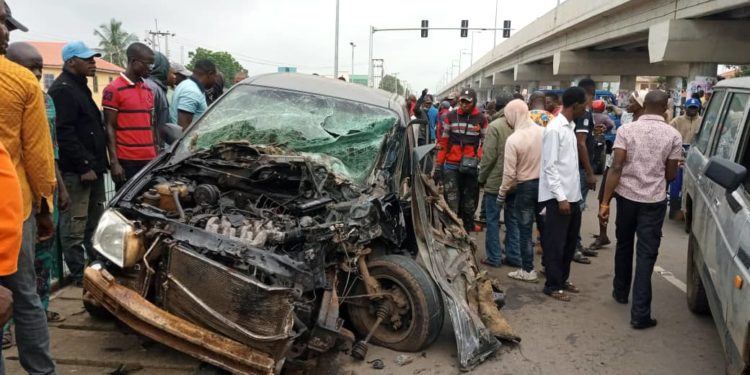 An unknown commercial motorcycle operator was on Wednesday crushed to death in Ado Ekiti, Ekiti State capital by a motorist after he allegedly refused to stop when the traffic light was on red.

The gory incident occurred at about 10:38 am under the flyover at Okesa along Olukayode Stadium.

The incident caused pandemonium around the area with sympathiser clustered in groups to commiserate with the deceased.

It was gathered that the body of the deceased had been deposited at the morgue of Ekiti State University Teaching Hospital(EKSUTH), Ado Ekiti.

When newsmen visited the spot, the skull of the deceased was shattered and the blood-drenched the body of the space wagon with plate number FF 188 APP that killed him and the road.

A police officer, who was stationed at the traffic light to control vehicular movement but spoke anonymously said the commercial bike operator was overrun by the green colour space wagon after riding against traffic light.

The accident led to a multiple head-on collision that caused traffic jam along Okesa-Fajuyi road, as the car swerved off the road and hit a truck at the back.

Narrating how it happened, the officer, said the Okada rider was coming from Okesa-Oluyemi Kayode stadium road on top speed and rode onto the road despite being stopped by red light indicator from the traffic light.

“Instead of him to obey the red light that had stopped those coming from his side, he decided to circumvent it and rode onto the road.

” And the man that was driving the car had already moved and unexpectedly, the motorcyclist rode onto the road and was hit by the car and he was overrun.

“We rushed there to save him but he died instantly and the body was taken to the mortuary”.

An eyewitness revealed to journalists that the driver immediately fled the scene upon realising that the motorcyclist had died.