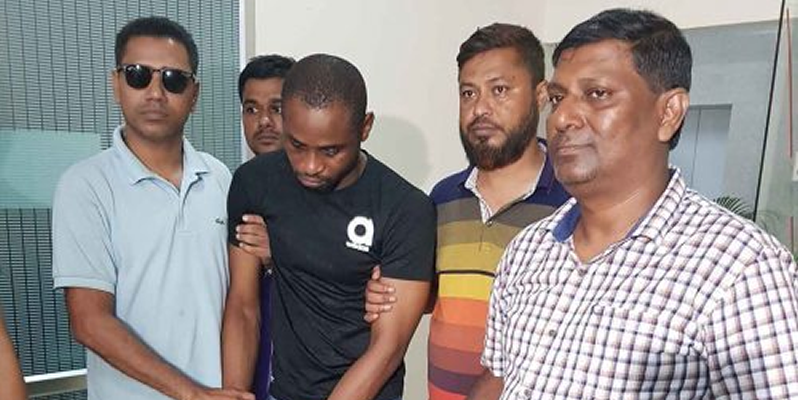 Nigerian Ajah Anayochukwa Onyeanwusi, who sells garments in Dhaka Bangladesh has been arrested, after authorities found that his real business is dealing in methamphetamine, with street name as ICE or crystal meth. And he was coordinating an international network.

Dhaka Tribune reported that Onyeanwusi came to Bangladesh as a student and was admitted to ASA University in Shyamoli of Dhaka. After getting his bachelor’s degree from the Department of Pharmacy, Onyeanwusi started his own garments business.

Onyeanwusi joined the drug trade in Bangladesh through Darknet, but his trade is not limited to the country. He also frequently travels to: Thailand, Malaysia, India, Uganda, Kenya and Singapore – mostly under the guise of a businessman – to buy ice from there, which he later trades in Bangladesh.

This information was provided during the press conference held by the Department of Narcotics Control (DNC) at its headquarters, held on Friday afternoon, after Onyeanwusi’s capture from the Airport Road area in Khilkhet, Dhaka on Thursday evening.

Mosaddeque Hossain Reza, additional director (intelligence) of the department, said acting a on a tip-off, they arrested Onyeanwusi with 50g of ice during a drug drive in that area. Later, upon further interrogation, they recovered 472g of ice from Ajah’s residence in Dhaka’s Bashundhara area.

According to Reza, after primary interrogation, Ajah admitted to being a dealer—and also a supplier—of crystal meth, in seven to eight countries other than Bangladesh.

“This drug is still very new to the country,” he continued. “So, to promote it, Ajah was selling it at a price lower than Tk5,000.”

During his interrogation, Ajah also told the police that the last shipment of crystal meth came five to six days earlier, through DHL courier service, from Uganda.

Ajah was trying to leave the country to visit his parents, as his mother had recently died– which is why he was trying to sell the latest shipment of meth as fast as possible, to finance his journey, the DNC additional director said.

“We are currently investigating the situation,” Reza added. “A case has been filed against him at Khilkhet police station.”

Crystal Meth, or Crystal Methamphetamine, is a strong and highly addictive drug that affects the central nervous system.