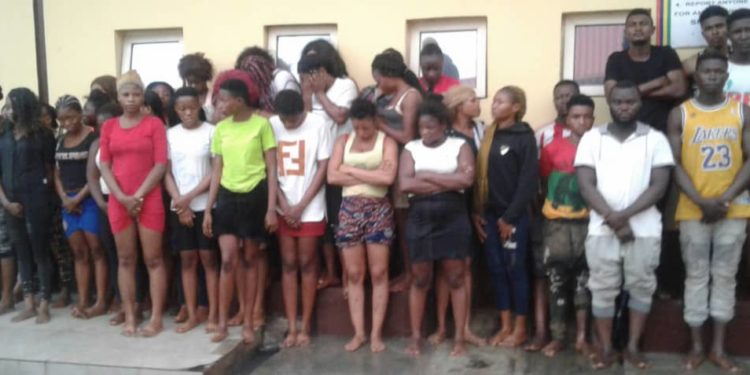 Operatives of Lagos State Environmental and Special Offences (Enforcement) Unit (Taskforce) in a midnight raid in some parts of the State over the weekend arrested 77 suspected criminals including prostitutes.

Chairman of the Agency, Olayinka Egbeyemi, a Chief Superintendent of Police in a statement disclosed that the mid-night raid was carried out due to the incessant complaints by residents around Akowonjo, Egbeda, Shasha, Iyana-Ipaja, Ayobo and Abule-Oki and in continuation of total eradication of criminal hideouts across the State.

Egbeyemi disclosed further that the raid was carried out on the directives of both the government and the State Commissioner of Police, CP, Zubairu Muazu.

He stated that the CP is poised at tackling current challenges and making sure that criminal elements were no longer allowed any free reign; “they will not be given freedom of space to practice any of their criminal acts.”

He confirmed that after the Agency conducted a thorough screening of all those raided, only 12 males and 26 prostitutes without proper means of identifications were left to be prosecuted.

Meanwhile, the State Government has taken over the Aluminium Village at Dopemu, Agege over breach of security and peace.

Egbeyemi hinted that the enforcement team of the Agency demolished all illegal shanties where criminal elements (Awawa cult gang) hibernate to perpetrate their nefarious activities on innocent members of the public.

According to the Chairman “While we are still on the trail of the two prime suspects, Tobi Akinsanya and his second in command, aka Body, we want to assure members of the public that Awawa cult gang have murdered sleep and they will see no sleep anymore, we shall make sure that all of them are rooted out and they face the full wrath of the Law”

He, however, quoted the Commissioner of Police to have warned parents to always monitor their children and wards as anyone caught fomenting any trouble or engaging in any criminal activities such as selling/smoking illicit drugs, rape, cultism or robbery would be prosecuted in accordance with the law.