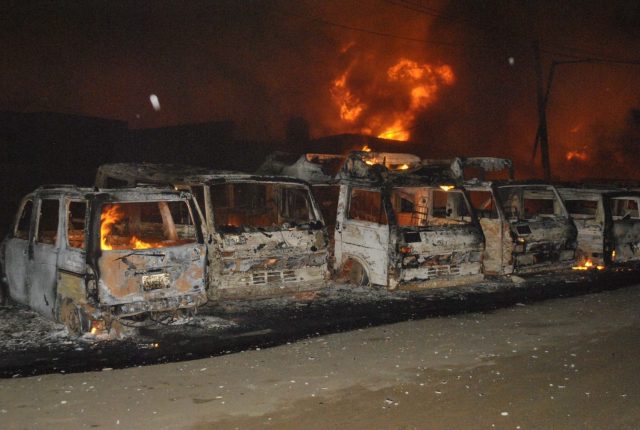 It is more than one week since Ijegun, a Lagos suburb, was ravaged by a pipeline fire, but the pains are yet to vanish. Many residents of the community are still struggling to piece the bits and pieces of their lives together after the disaster impelled by petroleum thieves who vandalised the oil pipeline that passed through the community.

Realising that some residents of the area were aware of their nocturnal activity and that security agents had been alerted, the oil thieves were said to have fled the scene without covering up the point on the pipeline where oil was been siphoned. The petrol that gushed out from the pipeline made its way into the thickly populated community, resulting in a huge fire that claimed lives and destroyed properties.

From the two initially reported, it has since become a harvest of death. At the last count, no fewer than 12 lives were reckoned to have been lost in the tragic incident. And while the entire community is grieving over the incident, two particular families were most affected, having lost nine of their members.

For Afolabi and Modu families, things would never be the same again as nine of their members were virtually wiped out by the fire incident. The few who managed to survive were still in critical conditions in the hospital where doctors are battling to save their lives. Catholic Mission, the street where they live, was most affected by the early morning inferno. The massive fire made its way into the street through a canal that separates the two sides.

According to eyewitnesses, the fire broke out when a certain Baba Friday who wanted to start his Volkswagen Varagon bus was warned not to do so because of the heavy smell of petrol resulting from activities of pipeline vandals who had operated in the area from late in the night to early morning, but he refused. Unfortunately the bus produced a spark that resulted in a huge fire that nearly consumed Baba Friday himself. Eyewitnesses said he had to dive into a carnal on Catholic Mission Street in a bid to get rid of the fire on his body, not knowing that the petrol that spilled from the pipeline had spread into the canal. That was how the entire street was gutted.

READ  “This Is An Attack On Body Of Christ”, Pastor Laments As Enugu Govt Demolishes Church, Equipment Worth N70m The House where the incident happened

For Noah Afolabi, an apprentice in his teens, Wednesday, July 2 began like any other day. Upon his return from work, he had dinner and went to bed only for his panicky father to storm his room early on Thursday morning to wake him up. The panicky father also woke up the other members of the family, telling them that the community was engulfed in fire and that everyone should run into safety.

As Noah rushed out of the house with his younger sister, the smoke and heat from the fire became intense. They ran as far as they could, but lost on the father and other family members was the fact that the youngest child of the family was still inside the house sleeping. The panicky father told the rest of the family to continue to run into safety while he rushed back to the house in a bid to save the toddler. By then, the flame and the resultant heat had become too intense and both Afolabi and the toddler he went to rescue died.

Explaining the circumstances of their death, one of Afolabi’s sons, Enoch, said: “I held my younger sister and we started running as fast as possible. The fire had almost got to us before there was a loud explosion and it receded. But while we were save, my father and other members of the family were not lucky like us. They lost their lives.

“My father actually went back into the house to rescue my three-year-old younger brother. But by the time he returned to the street, the heat had become too intense. It was the heat that killed him; not the fire.”

Asked how many members of the family died in the fire incident, a distraught Enoch said: “Four of them: my father, his wife, my brother and my sister. Three others are in the hospital.”

Enoch is currently living on the gestures dispensed by neigbours and family friends. The younger sister he helped to escape has since been taken to Abeokuta, Ogun State to stay with their relations. Asked about his relations who were hospitalised, he shook his head in a gesture of lamentation and said: “People have been contributing money to help us. My friends, family friends, neigbours and other members of the community are the ones helping us. The money we get from them is what we are using to get medication for those in the hospital.

“I am only an apprentice learning carpentry. Our father was the one feeding the family with the proceeds of his work as an auto technician.”

He said the experience at the private hospital in Ijegun where his three sisters were being treated had not been palatable. “We had to beg before the nurses attended them,” he said as he pleaded for assistance from the government and kind-hearted individuals.

But the Afolabis are not alone in their travails. Another victim of the incident, Mr Isaiah Ige, had a huge lump on his forehead as he bore his three-year-old baby girl on his shoulder with burns all over her body. The toddler groaned continuously as his father tried to pamper her.

In another ward at the hospital, his six year old daughter also lay with serious burns on her body. Beside his daughter was another bed where his pregnant wife, Anike, lay with close to 60 per cent of her body covered with burns.

His wife had gone to their family home in Ijegun to see her family members only for Mr. Ige to receive a call in the morning of that Thursday, telling him about the fire incident. Ige, however, said he could not believe the story he was being told until he saw his wife and children.

“I was told that the fire had spread through the gutter and that my family members were badly affected and had been rushed to the hospital. I decided to come to the hospital, not knowing the severity of the burns. It is really terrible,” he said.

Ige recalled that in the Modiu family which his wife visited, there were 12 people in the house when the incident occurred. He listed the members of the family who died in the incident as his father-in-law Modiu Shakiru; his wife Idiat; a woman called Iya Jummy and his first child as well as two other women named Zainab and Jamila. Four others, he said, were still receiving treatments in Gbagada General Hospital while his own wife and children were being treated at New Dimension Hospital, a private hospital in Ijegun.

Asked how the family was coping with the bills, Ige said: “We don’t have a choice. Friends have been coming to help. I have spent the money I kept for something else on their treatment. “

Asked if there had been any assistance from the government, he said, “No, there has not been any. We have not seen anybody.”

Ige, however, said the family was hoping that government would help in offsetting their huge medical bills and the losses they suffered. “You know I can’t force them (government) to help my family. We have lost five members. I can’t tell the government what to do or what not to do. But we need help urgently.”

The Medical Director of New Dimension Hospital, Ijegun, where the Iges are receiving treatment, Dr. Leonard Fagbemi, said Ige’s wife and children were responding to treatment. He expressed hope that they would soon have total recovery.