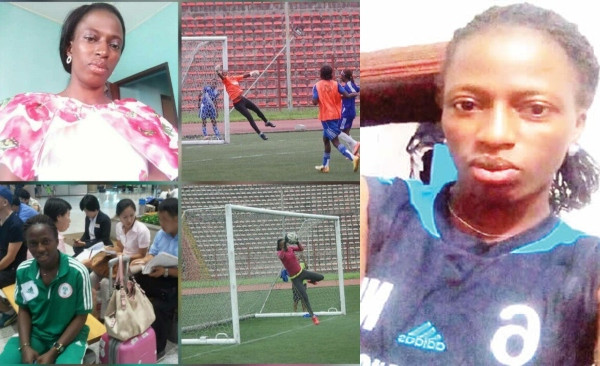 Bidemi Aluko, the Super Falcons goalkeeper between 2012 and 2013 is reportedly battling Bosom cancer which was diagnosed with in 2017 while still playing for Rivers Angels in the Nigerian Women’s Premier League.
Narrating how she was forced to quit football over the ailment, Bidemi told Punch that she was asked to undergo surgery, chemotherapy and radiation and needs N5m for treatment in Nigeria.

“It was in 2017 that I was diagnosed with Bosom cancer. The incident made me stop playing. I was still with Rivers Angels when this happened. Since then, I have been doing all the necessary things the doctor asked me to do. I came out of it but I don’t know what happened again. Recently, I was feeling so bad and unhealthy. I was feeling severe pains all over my body. I went to my doctor to complain and he said I should go for a test.

“The result came out 90 per cent tumour cells, which means the type of Bosom cancer I have is aggressive and needs urgent attention. Since then, I started undergoing a target therapy.

“The doctor told me I need drugs and each costs about N470,000 per dose. I am expected to take 10. I already did the operation since 2017 but don’t have such money (for the drugs) now.

“So far, Falcons (players) have helped; they have contributed something for me and I appreciate that but the money isn’t complete yet. I am soliciting to Nigerians to help me, save my life, so that I will be able to foot my medical bills.

“To survive this difficult period, I will need at least N5m for the whole drugs as I will be taking them every two weeks. I do not wish to come publicly to solicit for funds, but I have no other choice. I really need help.”