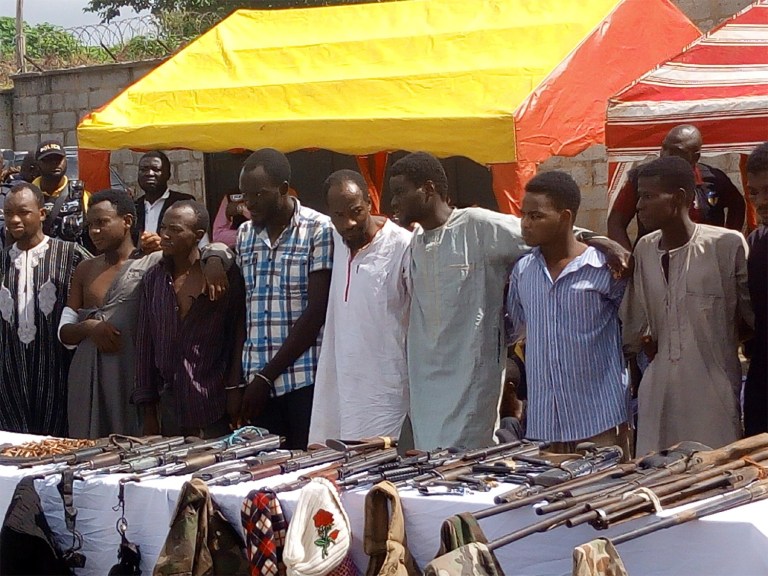 The alleged mastermind, Abdullahi Mohammed, 26, and indigene of Kano State, said they decided on getting the ransom in dollars, for easy movement, and less suspicion, and that he perfected the abduction plan with the help of some indigenes of Daura, Katsina State.

The suspect, who was paraded by the police alongside 12 members of his gang and 27 other suspected criminals in Abuja, said they were able to keep the district head for over two months, through the help of two members of the gang who received weapon training in Libya; for about two years.

Mohammed said with the help the two experts, who had received special training on how to operate, fire, dismantle and couple back AK-47 rifle, as well as lay ambush and disarm security agents holding the rifle, they were able to keep the traditional for 60 days

It was also learnt that five, out of the 13-member gang, who participated in the kidnap of the traditional ruler, are from Daura, while two are from Kano State, where they eventually took their victim to.

Parading the suspects before newsmen in Abuja, yesterday, Force/Public Relations Officer, Frank Mba, said the suspects succeeded in their operations, with the cooperation of some villagers, and called for the need to carry out proper screening of domestic staff; before employing them.

Mba said some of the suspects are foreigners, from Niger Republic, and that the crime was perfected with the help of local criminals and local collaborators.

He confirmed that five, of the 13 suspects are from Daura, and two, from Kano state.

A member of the gang, Yusuf Dahiru, told his story to newsmen.

This is his testimony:

“We kidnapped the Magaji Daura because we wanted to make money from him since he has very rich children.
What we demanded from the family, as ransom, was $30 milion, and we had not made any profit before we were caught by the police.

The truth is that I do not know why they targeted the Magaji Daura. All I know is that my boss brought the job for me to do and I recruited some of my boys and we went to Daura and executed the job.

We have our master who directs us on what to do and I am a professional kidnapper.

Four of us who went for the operation and, through the help of one of our member, Babawali, who is an indigene of Daura, it was very easy for us to carry out the operation because he knows the town and knows the movement of everybody.”

Asked how they treated the traditional ruler while in their custody, he replied:

“We treated him very well because we knew his status.

He was specifically handed over to me, so, I made sure he received royal treatment for the 60 days he spent with us.
We did not beat him. We did not treat him badly at all I took very good care of him and gave him everything that he needed.”

Next was another gang member, Sarfilu Abdu, who was said to have given the order for the kidnap.

Abdu told newsmen he participated after he was told that the kidnap was to force security agencies to release some of their members in their custody.

He said he never knew it was for making money, otherwise he would have backed out.
Said Abdu:

“Three months ago, I was contacted by some members of my group that they wanted me to lead them to Daura, to kidnap the Magaji Daura.

What they told me was that they were kidnapping him for exchange of their members in detention, so, I agreed and led the operation.

But, I was surprised because, after the kidnapping, they began to demand for ransom.”

Yet, another member of the gang, who said he specializes in supplying weapons to the group, as well as being the chief negotiator for ransom, said:

“I was told to ask for $30 million, by one Abdullahi Mohammed, also a member of our group. I was also the one who did the video of the kidnap.

We were not given any money before we were arrested”.

On his part, another member of the gang, who is the youngest, at 19, said he has been in the business of providing Information Communication Technology for kidnappers who usually contact him, said he, alongside his colleague, had made several videos for kidnappers before he was arrested.

Another suspect, Mohammed Abdullahi, also from Kano, shared his story.

I got into the kidnap business through one Suleiman and I had participated in two kidnap operations where we kidnapped some expatriates before my friend introduced me to Bilal, for the operation at Daura.

To become perfect in the art of kidnapping, Abdullahi said he received training in Libya, where he was taught some skills on how to assemble, dismantle, shoot and kill and how to disarm security agents.

“I am 19 years old and I have been in the kidnapping business for some time now and made money.

We did the video and the negotiation for the group. Because I wanted to excel in the business, I went to Libya for training where I spent eighteen months.

I was trained on how to operate the AK-47 rifle.

I was taught how to fire and how to dismantle and couple back the AK-47.

I was also trained on how to disarm security agents who are holding AK-47 rifles and how to lay ambush.
These were the trainings we received in Libya.

Among the 13 of us who were arrested, two of us went for the training, myself and Ibrahim.

We were sent there on sponsorship.”