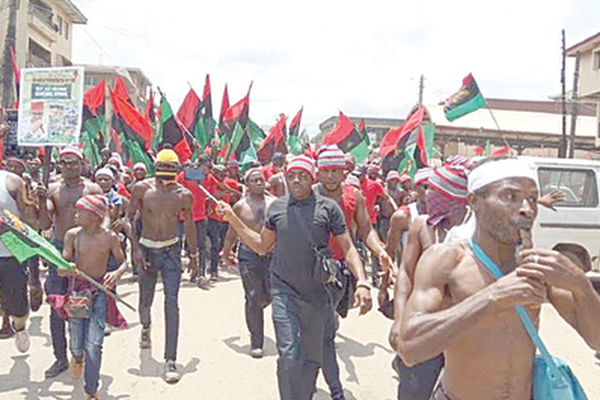 Amid calls by Miyetti Allah Kautal Haure for Fulanis to remain in the South and defend themselves, the Biafra Nations Youth League, BNYL, have asked the herders to leave the South or face actions.

BNYL said it had organized strong militia groups across its areas of influence to repel any attacks by killer herdsmen.

Chief Press Secretary of BNYL, Comrade Kufre Obot, made the disclosure to newsmen at the weekend in Calabar.

He said “The apex Fulani group is encouraging the killer herdsmen to remain in the South and kill in pretense of self defense but that is dead on arrival, because we have prepared our boys ready to repel any attacks, Miyetti Allah will be shocked at what they will see”.

Obot also disclosed that BNYL have focused on grassroots campaign since 2016.

“We are a grassroot movement. It is evident in our grassroot programs in Eket, Ikom, Ahoada, Emohua, Bakassi, Obudu and other towns. We have decided to checkmate herders excesses”.

The group’s spokesman urged communities in the South-East and South-South to organize vigilante groups to protect the communities.

He added that: “A community in Imo State called Abba in Nkwerre LGA have become the first to launch strong a security group with drone cameras, security phones and alarm polls across the communities.

“I would advise others to follow suit and be part of efforts to secure our land because no group can do it alone without the communities helping themselves too.”