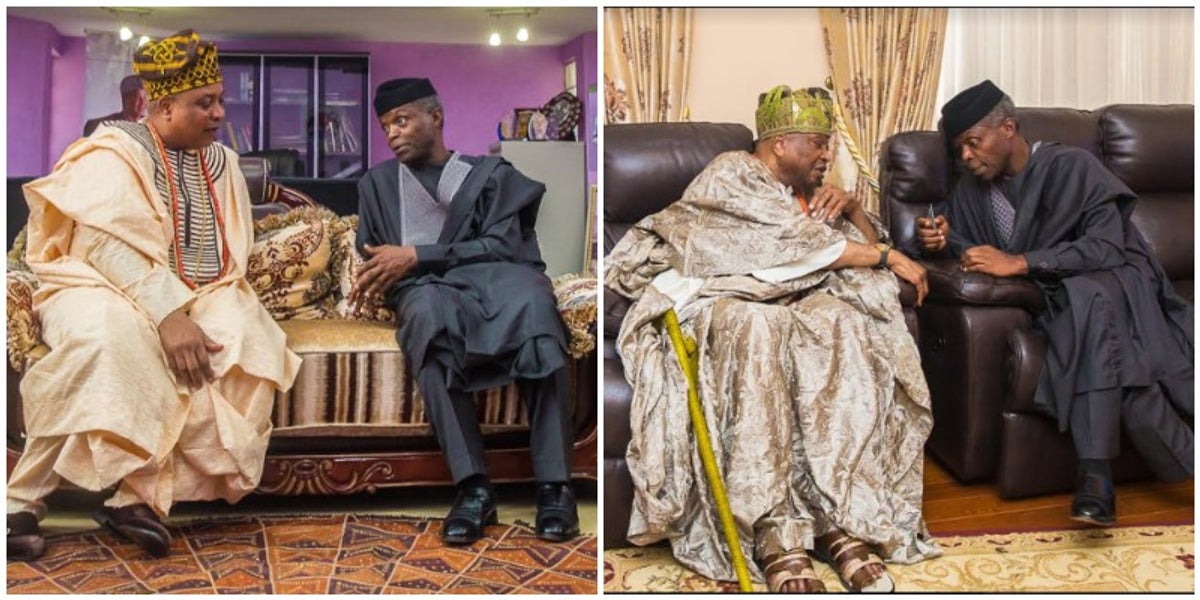 Vice President, Yemi Osinbajo on Saturday held consultations with the Akarigbo of Remoland, Oba Babatunde Ajayi, as well as other monarchs in Ogun.

The consultations were on the way out of the security challenges currently confronting Nigeria.

Osinbajo was accompanied to the palace of Ajayi by Gov. Dapo Abiodun of Ogun.

The vice president, who fielded questions from newsmen after the meeting, said the meeting was on the instruction of President Muhammadu Buhari.

“As you know, there are many significant security concerns all over the country, and there are concerns also in the southwest.

“So, I am here on the instruction of the president to consult with the traditional ruler, the governor and others on what to do to beef up security and to generally improve the security architecture.

“Of course, you know that Kabiyesi is not just a traditional ruler, but a very important part of the government.

“That is why we are here; to talk to him and agree on few modalities for beefing up security; and ensuring that we are fully conscious of all that is going on, just to be sure that peace and security reigns here and across the country.

“I think for all of us, the most important thing to realise is that we are one Nigeria; we are one country; we need to work together to ensure that it is peaceful, secure and happy for all of us,’’ he said.

He noted that Nigeria had the potential to give its citizens all they desired.

Osinbajo, however, said that some people were working against the interest of the country by trying to cause instability.

He expressed optimism that by God’s grace, Nigeria would overcome all its problems and set itself on the path of peace and prosperity.

The vice president, in the company of Abiodun, then proceeded to Ijebu Ode, where he also held a private meeting with the Awujale of Ijebu Kingdom, Oba Sikiru Adetona.

Speaking with newsmen after, Osinbajo said that Awujale was one of the most important voices in the Southwest.

He said they had discussed the very important steps to take in order to improve the security architecture generally.

According to him, the monarch has given a lot of insight; his own views, on what needs to be done, how to go about it; and what has been done already.

“But very importantly, it is his commitment to ensuring that there are peace and security and that everybody lives in peace with one another and maintains the highest level of security.

“We are consulting with many of the traditional rulers across the country, but there are concerns in the Southwest now.

“I will be in Osun on Tuesday; we are going to go round to see the Alake, the Oni and other traditional rulers, and primarily, they themselves want to participate in improving the security architecture.

“The President has spoken about the role of traditional rulers in maintaining peace and security in their own localities.

READ  What military did to Nigeria – Anyaoku

“One of the critical things we expect with our community policing efforts is some integration between the traditional rulers, the community and police; and efforts they are making to improve intelligence; and we need to understand what is going on.

“We need to know who is where and what exactly is happening all around so they can be transmitted to the more formal security agencies such as the police and the army, depending on where and what the situation is,” he said.

The vice president had earlier attended the installation of 90-year-old Chief Emmanuel Osibona as the Father of the Church, ‘Baba Ijo’, of Our Saviour’s Anglican Church, Ikenne, Ogun, his hometown.