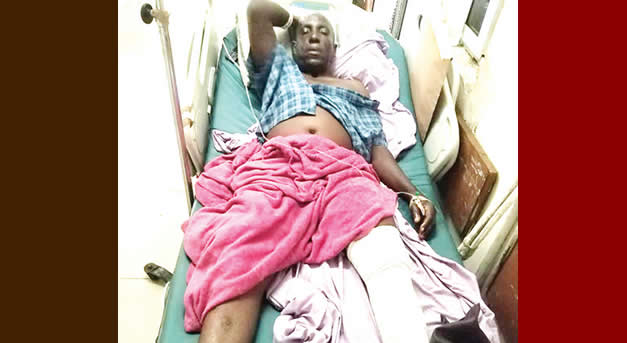 An officer of the Lagos State Traffic Management Authority , Damilare Adeshina , has decried the neglect by the agency following his involvement in an accident in the line of duty.

According to PUNCH Metro reports, it was reliably gathered that Adeshina , who was deployed in Zone 6 , Agege area of Lagos, was pushed from a truck while he was trying to apprehend the driver , who drove against traffic.

The 52 – year -old lamented that since he had been admitted to hospital, the agency had not provided him with any financial support.

He said , “ I am a LASTMA officer deployed in the Agege area . On Friday, June 29 , around 12 . 19 pm, while my colleagues and I were at our duty post, a truck with number plate EKY 254 XA drove against the traffic at the Agip/ Odejobi Road junction. We stopped the driver and when we asked him why he drove against the traffic, he said a member of the Lagos State House of Assembly asked him to .

“ I tried to get into the truck to apprehend the driver and his motor boy pushed me . I fell down while the truck driver sped off . My colleagues rushed me to the General Hospital , Ifako, where I was transferred to the Lagos State University Teaching Hospital , Ikeja .

“ I was supposed to undergo surgery on July 4 , 2019, but I couldn ’ t because I was unable to raise the money required . It was my brother , who sent the money , which I spent on an X-ray and some other tests .

“ The number plate of the truck was traced and the driver was arrested . It was the truck driver, who brought the sum of N 300, 000, which my Zebra and Commander were aware of . The General Manager of LASTMA was also informed and he gave approval for me to collect the money .

“ It was the money I used for the surgery . Now , I have been discharged, but I can ’t leave the hospital, because I have not been able to pay the balance of the medical bills . ”

The Ogun State indigene said when he tried to contact the agency , he was told that LASTMA did not have money , adding that he had been in a helpless situation since the accident occurred .

The father of four said , “ When I called the agency ’ s welfare department , I was told that the agency did not have money . My GM was also trying to put the blame on me that I negotiated with the owner of the truck behind him despite the fact that he was the one who gave me permission to collect the money ; I am really helpless. ’

When the Public Relations Officer , LASTMA , Hassan Mamud , was contacted , he said Adeshina ’s action contravened the rule of the agency , adding that the agency would do all in its power to support him to get back on his feet.

Mamud said , “ The man is an officer of the agency . The vehicle that hit him escaped but immediately we found out about it, he was taken to the hospital. We identified the vehicle and traced the owner , but what Adeshina did was to enter into personal negotiations for compensation with the owner of the vehicle to the tune of N 300 ,000 .

“ This is against our practice and principle. He did so without informing the agency . It was only on Tuesday that he wrote to inform us that he collected money from the owner of the vehicle , but it was not sufficient for him to take care of his medical bills .

“ But because of our concern for any of our officers, who suffer any injury or accident on duty, we took the matter up from there and we have been working round the clock to raise additional money for him to take care of his health .”