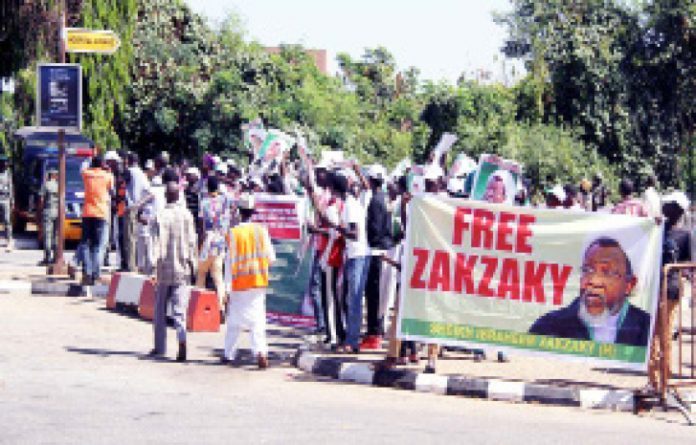 The Islamic Movement of Nigeria (IMN) otherwise known as Shitte said yesterday that all it requires from the federal government to stop its current agitation is the release of the incarcerated leader of the sect, Ibrahim El-Zakzaky and his wife, Zinat.

The group was reacting to its proscription on Friday by government through a court order.

Human rights lawyers, Mr. Femi Falana and Chief Mike Ozekhome both Senior Advocates of Nigeria (SANs) however slammed the federal government for its move against the sect.

The lawyers dismissed the government action as illegal and immoral.

But the Secretary of the influential Arewa Consultative Forum (ACF), Chief Anthony Sani, said last night that a court of competent jurisdiction could not have declared the IMN a terrorist group without concrete evidence.

In outlawing the IMN, Justice Nkeonye Maha of the Federal High Court, Abuja also designated the activities of the Shiite in any part of Nigeria “as acts of terrorism and illegality.”

Besides, the court restrained “any person or group of persons” from participating in any form of activities involving or concerning the IMN “under any name or platform” in Nigeria.

Reviewing the development yesterday, spokesman for the IMN Ibrahim Musa said the incarcerated couple should be released for them to take care of their damaged health.

He pleaded for the support of the international community for the group.

“We hope the international community will put more pressure on the government. Our major demand is for them to release our leader to go and look after his health,” he told Channels TV

“If they do this; all our agitations, especially on the streets of Abuja will meltdown.”

He also said that members of the group and their lawyers are currently studying the court order with a view to reacting appropriately.

But he was also quick to say it was absurd for the Federal Government to proscribe the group.

He said: “As regards the court orders proscribing the Islamic Movement in Nigeria, for now, the movement hasn’t reached a decision.

“The leading members and lawyers are studying the court order and very soon, they will issue a way out for the movement.

“But we believe we are the victims of all that has been happening so it is very unfortunate that a group that has not retaliated, all the killings it has suffered under the President Muhammadu Buhari’s administration, it will now be accused of being a terrorist group.”

READ  Couple Killed In The Presence Of Three Children In Umuahia, Buried Amid Tears (photos)

He claimed that the group and its members, despite the attack on them, have not killed anybody.

“Have you ever seen a terrorist group that one-third of its members have been killed and they haven’t killed anybody?

“So it is absurd we believe, for the Federal Government to take this step of proscribing the IMN.”

Counsel to El-Zakzaky, Mr. Femi Falana told The Nation yesterday that the proscription of the IMN was both immoral and illegal.

He recalled that the Kaduna State government had, on its own, proscribed the group in 2016 and even gazetted the action yet IMN continued to operate in defiance of the proscription.

A similar action, according to Falana, was taken by the federal government against the Indigenous People of Biafra (IPOB) in 2017 via an ex parte order issued by the Federal High Court but IPOB has continued to operate in spite of the proscription.

He said: “However, in a desperate bid to prevent the Shiites from demanding for the release of their detained leader, El-zakzaky and his wife from the custody of the State Security Service, the Buhari administration has proscribed the IMN.

“Since there are millions of Shiites who belong to the IMN, the Federal Government will soon realise that it has merely driven the body underground.”

Falana also recalled how, in 2003, Buhari and other leaders of the defunct All Nigeria Peoples Party (ANPP) instructed him (Falana) to challenge the Police disruption of their rally in Kano to protest the alleged rigging of the 2003 elections.

The police had claimed they acted because the organizers of the rally did not obtain permit.

His words: “On the instructions of General Buhari and other the ANPP leaders, I challenged the disruption of the rally and the legal validity of police permit for rallies and political meetings at the Federal High Court. ANPP won the case.

“Apart from condemning the violent disruption of the rally by the Police, the court declared that police permit for rallies was illegal and unconstitutional. The appeal filed against the judgment by the Police was dismissed by the Court of Appeal.

“In fact, the Justices of the Court of Appeal unanimously held that the right of Nigerians to protest against the policies of the government is part of the freedom of expression guaranteed by the Constitution.

READ  COVID-19: US President, Donald Trump Reveals When Vaccine Will Be Out

“Therefore, the proscription of the IMN for the demonstrations of the Shiites against the disobedience of court orders by the Buhari regime is immoral and illegal in every material particular.”

Falana called for the withdrawal of the proscription order.

“The illegal proscription of the IMN should be withdrawn. It will not stand as the fundamental right of the Shiites to freedom of religion is constitutionally guaranteed,” he said.

In a separate interview with The Nation, Ozekhome said: “The proscription by the government of the Shiites religious group is highly discriminatory, unconstitutional, as was the case of the Indigenous Peoples of Biafra (IPOB).

“What group could be more terrorist than the herdsmen that have held Nigeria down by the jugular for years, killing, maiming, burning, raping, turning Nigeria into a crimson field of bloodbath? Until the government bans and outlaws these, it is certainly not serious.

“They (Shiite members) are demanding the release of their leader still kept in government dungeon in spite of several court orders. The Shiite group is a religious group. It is not an association that could be banned.

“Section 10 of the 1999 Constitution makes Nigeria a secular state. You cannot ban religion, a people’s belief.

“There is also freedom of thought, conscience and religion in Section 38, while sections 40 and 41 allow for freedom of movement and association.”

But the Secretary of the Arewa Consultative Forum (ACF),Chief Anthony Sani,said last night that it was difficult to fault the position of the court on declaring IMN a terrorist group.

“If court of competent jurisdiction has declared the Islamic Movement of Nigeria, (IMN), to be a terrorist group, it is expected that the court must have credible evidence in support of such judgement,” he said by phone.

“And since ACF is not privy to the facts which informed the judgement of the court, the forum cannot proffer an informed view on the judgement besides noting that the fact that, since we are in a democratic rule of law, due process of law governs actions.

“And if the IMN is not satisfied with the court judgement, the movement is at liberty to appeal the judgement instead of street protests outside due process of law.”

READ  “We are not Lazy” – Nigerian youths reply President Buhari, share photos of their handiwork

Members of IMN have been holding road protests in Abuja , Lagos and other parts of the country over the last few weeks to press for the release of El-Zakyzaky and his wife, Zinat.

They said it was wrong of government to keep holding on to them after the courts had ordered their release.

The couple have been in detention since 2015 following a bloody clash in Zaria, Kaduna State, between the Shittes and the entourage of the Chief of Army Staff, Lt-General Tukur Buratai.

The couple is also facing trial for culpable homicide, unlawful assembly, and disruption of the public peace, among other charges filed against them by the Kaduna state government.

The immediate past Attorney-General of the Federation (AGF) and Justice Minister, Mr. Abubakar Malami, told Senators on Friday that the continued incarceration of El-Zakzaky is in the overall interest of national security.

Malami was in the Senate for screening in respect of a fresh ministerial appointment.

He had been taken to task by the Minority Leader, Senator Enyinnaya Abaribe, to explain to Nigerians why the rights of those granted bail by the court were still being violated by keeping them in custody.

Malami did not mention any name but explained that those granted bail and yet to be freed, were being held in the overall interest of the country.

The Federal Government in September 2017 also obtained a court order proscribing IPOB and designating it as a terrorist group.

Judicial efforts by IPOB to reverse the order have not succeeded.