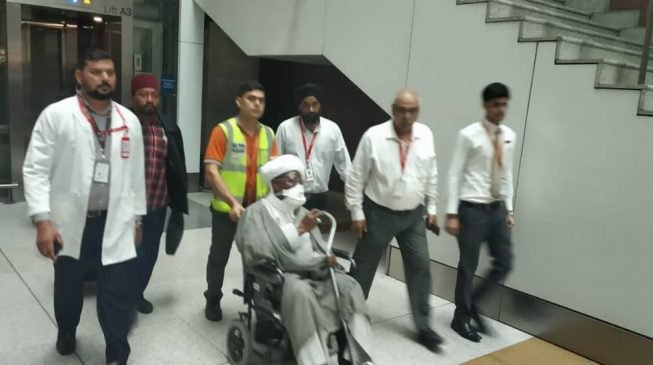 Ibrahim El-Zakzaky, leader of Islamic Movement in Nigeria (IMN), says the situation in India is worse than he experienced in Nigeria.

In an audio message released on Wednesday, El-Zakzaky described the situation as “worse than a prison setting”.

The IMN leader and his wife left Nigeria for the Asian country on Monday based on a leave granted by a Kaduna high court.

In the audio, El-Zakzaky lamented the security situation in the hospital, describing it as “pathetic and worrisome”.

“The hospital officials received us well they told us that they parked two ambulance vehicles, deceiving the crowd while taking us out through another way, saying that it was for our own safety,” he said.

“On getting to the hospital, we were placed under a tighter security situation worse than what we have been witnessed in Nigeria. We are currently more confined than when we were in Nigeria, worse than a prison setting.
Back home in Nigeria, they agreed that nobody should take us to any other hospital aside the hospital of our choice but we got to realize that the doctors they brought to us were there just to give advice.

“All what we have seen here, have shown us that there is no trust, they just brought us here for another detention. I have been in detention for about thirteen years but I’ve never seen this kind of security that I’m seeing here, even at the door of my hospital room, there are many security personnel waiting, heavily armed.

“They didn’t even allow me to go to the next room, I started asking myself, all these while I’ve been in detention, I’ve never seen this type. Even if I’m in the cell, they usually lock us up around 9pm and open the cell around 7am and they allow us to go anywhere we want in the area we are.”

Abdullahi Musa, secretary of academic forum of IMN, confirmed the authenticity of the audio to TheCable.

Musa added that El-Zakzaky might return to Nigeria over a change in the medical arrangement with doctors in India.

“The audio is true. The federal government has connived with the Indian government to scuttle the treatment. They brought a new set of doctors instead of the ones the Sheikh (El-Zakzaky) made prior arrangements with,” he said.

“So, the Sheikh smelled a rat and refused to submit himself to the doctors to treat him. He asked them why they prevented him from seeing the doctors he had earlier made arrangements with? So he said he will not allow them to treat him.”

Musa said the group is making efforts to sort out the problem.

The group had earlier accused the federal government of frustrating the medical treatment of El-Zakzaky in India.