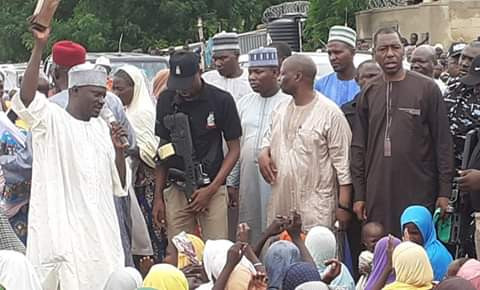 Borno State Governor, Babagana Umara Zulum on Monday August 19, went spiritual in Monguno where he has so far spent two days, coordinating, supervising and trying to sanitize the distribution of food items to one hundred and ninety thousand and fifty ‎internally displaced persons, majority of them from Marte, Kukawa, Mobbar, Guzamala and Monguno local government areas, all in northern part of the state.

The Oath was also administered against IDPs who have the habit of collecting multiple rations of food most of which they sell in markets, depriving fellow displaced persons of food.

Governor Zulum departed Maiduguri on Sunday morning and arrived Monguno by evening. Monguno is the largest town in northern Borno, a majority Muslim part of the state most troubled by insurgent attacks. Monguno is not far from Baga and Kukawa from where citizens fled after attacks. Monguno itself had come under the occupation of Boko Haram around 2013 and 2014. Early this year, the insurgents had made two failed attempts to sieze military barracks in Monguno.

Zulum had ordered the deployment of trailers loaded with varieties of food items ahead of his visit. The Governor also ordered that a copy of the Qur’an be made available. On Sunday night, the Governor held series of meetings with officials involved in humanitarian activities and those of local government areas wh‎ose citizens are displaced in Monguno.

Today Governor Zulum, at 6am, began tour of the 16 camps in Monguno. The organisers distributed customized tickets to bread winners of households. Mild dramas however took place when hundreds of adult male and female IDPs began to leave queues whenever the oath administrator (acting like a town crier) raised the Qur’an calling on God to punish anyone of them who was in the queue to collect multiple rations of food.

“Listen to me very attentively, Governor Zulum has asked me to announce to you, that from himself as your Governor down to humanitarian officials of SEMA, NEMA, other government officials and anybody at all, whoever diverts food meant for IDPs, may the curse of God through the instrumentality of the Qur’an, come upon that person.

May the wrath of God come upon anyone who has collected allocation ticket but came here to collect what is meant for others. You all know that food is distributed to households and everyone here is part of a household, if you know you are not the head of a household or that you have already collected your portion, better leave the queue or you incure the wrath of the Qur’an” the administrator, Babagana, popularly referred to as Babagana, said, raising the Qur’an with his right hand.

As he made the announcements in every camp, displaced persons left in numbers, some of them laughing.
Until the introduction of oath by the Governor, humanitarian workers have had to contend with problems of food vending by hundreds of displaced persons who collect multiple allocations. There were also allegations of dubious collaboration between some humanitarian workers and IDPs.