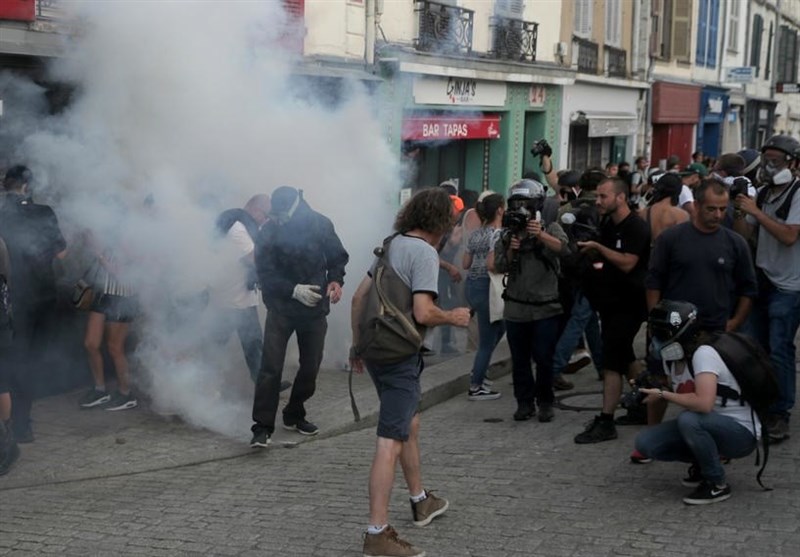 Police use teargas against protesters in Bayonne, France, Saturday, Aug. 24, 2019. World leaders and protesters are converging on the southern French resort town of Biarritz for the G-7 summit.

Clashes broke out on Saturday between several hundred protesters and security forces near the location of the G7 summit in Biarritz, southern France.

Protesters threw stones at police who were blocking access to a bridge in the neighbouring town of Bayonne, a dpa reporter observed.

The Police responded with tear gas and water cannon.

Some 68 people were arrested, with 38 of them detained for questioning, news agency AFP reported citing local authorities.

The organisers of a larger and calmer protest earlier in the day subsequently cancelled protest actions scheduled for the perimeter of the summit security zone on Sunday.

Citing what they said was an excessive police presence and heavy-handed security, they said they could not guarantee the safety of protesters at the actions.

They instead called for a “people’s wall” in protest at “the state of siege in the Basque Country,” but without specifying a location.

The evening’s clashes came soon after the summit between leaders of major Western powers and Japan, hosted by French President Emmanuel Macron, kicked off.

The earlier protest, in the towns of Hendaye and Irun on either side of the Franco-Spanish border some 20 kilometres away, passed off peacefully, with the organizers claiming 15,000 people had taken part.

The activists, who also held a counter-summit with lectures and workshops, argue that while Macron says the G7 should tackle inequality, the main cause of the problem is hardline free-market policies implemented by the leaders of wealthy countries.

French authorities have barred access to much of Biarritz except to residents and local workers for the duration of the three-day summit.

Some 13,200 police and gendarmes have been drafted into the Atlantic resort, along with extra prosecutors, and Interior Minister Christophe Castaner has warned that no trouble will be tolerated.