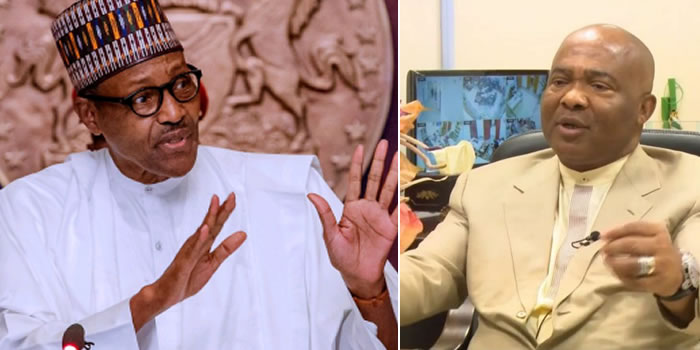 A former senator, Hope Uzodinma has said that President Muhammadu Buhari has appointed those that would work with him, consistent with provisions of the Constitution of the Federal Republic of Nigeria.

In an interview with the News Agency of Nigeria (NAN) in Abuja, the governorship candidate of the All Progressives Congress (APC) in Imo state said that the president appointed credible people as ministers, adding that they should be given the benefit of doubt.

In his assessment concerning the reaction of concerns expressed by some Nigerians that some of the ministers may not perform optimally due to several reasons, Uzodinma said it was hasty for anyone to draw a conclusion.

Speaking specifically on the age raised of the Minister of Agriculture and Rural Development, Sabo Nanono, the Uzodinma said “you do not condemn or disqualify what you have not seen.

“Let us allow him to work and if he is not performing up to expectations then we will know what to say.

“The minister is a Nigerian and there is nowhere in the Constitution that says that age is a barrier for the appointment of a minister.

“I do not think that is fair about the new Minister of Agriculture. He should be given the opportunity to contribute his quota to the development of the nation.

“There must be something Mr President saw in him before appointing him. So, let nobody condemn anybody. He is a Nigerian and he is entitled to also serve,’’ he said.

The former lawmaker also expressed optimism that Nanono and the other ministers would perform optimally by working in line with the next level agenda of the president.

It could be recalled that the Federal Government had on Aug. 21, ordered a partial closure of the borders to check smuggling activities around Benin, Niger and Chad Republics.

Some of the smuggling routes around the country include Seme-Lagos in Lagos State, Jibiya in Katsina, Idiroko in Ogun, Illela-Koni in Sokoto State, Kabo, Saki, and Sikanda in Oyo State.