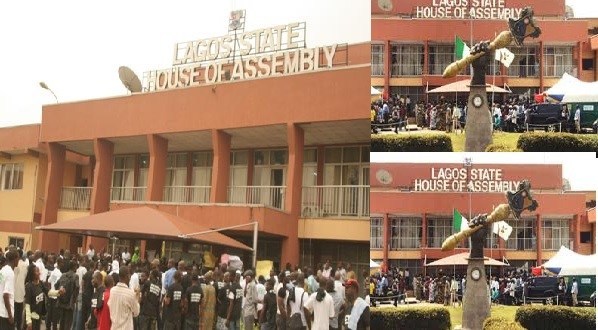 Some protesters on Tuesday stormed the Lagos State House of Assembly to express their displeasure over the killings of Nigerians in South Africa.

Nigeria News Agency reports that the protesters stormed the gate of the assembly at about 6p.m. in Ikeja.

The protesters were carrying different inscription “Stop the killings of innocent Nigerians in South Africa, MTN Nigeria, DSTV, Shoprite will not operate until the killings are stopped”, just to mention a few.

NAN reports that the violence gathered momentum on Sunday, when a protest march against drug-dealing by local residents in the centre of Johannesburg blamed on immigrants degenerated, with shops attacked and looted.

The violence spread to the nearby city of Pretoria, where mobs attacked immigrant traders, workers and shopkeepers on Monday.

South Africa President, Cyril Ramaphosa had condemned the violence on Tuesday and said he was calling in ministers with responsibility for security.

The leader of the protesters, Allwell Ademola, said that they had come to express their grievance over the gruesome killings of innocent Nigerians in South Africa.

Ademola, a popular Yoruba actress, therefore, urged the House of Assembly to come to the aid of Nigerians living in South Africa by stopping the killings.

While addressing the protesters, Mr Rotimi Olowo, representing Shomolu constituency I, urged the protesters not to engage in destroying property owned by the South Africans in Nigeria.

“Let us follow due process in resolving this issue because we cannot use violence to resolve violence,” he said.

On his part, Mr Temitope Adewale, representing Ifako Ijaye I, appealed to the protesters not put laws into their hands as the House would take urgent steps on the issue..

Adewale thanked them for registering their grievance in a lawful manner, urging them that their protest would be conveyed to the Speaker of the House for immediate action.