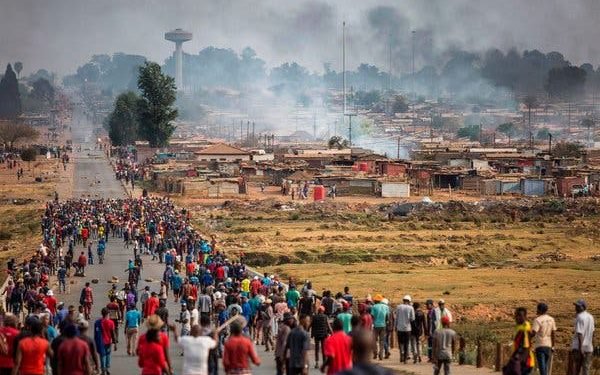 The evacuation exercise of Nigerians in South Africa may take more than one flight as the number of Nigerians indicating interest to return home is on the increase, it has been learnt.

Though over 400 Nigerians have indicated interest to return home following the recent xenophobic attacks on foreign nationals and their businesses by South Africans, it was gathered many more may eventually opt for the evacuation exercise.

Many Nigerians had lost their properties and businesses in the process and have become desolate.

The management of Air Peace had offered to airlift Nigerians who are willing to return home.

The Nation learnt on Monday that the evacuation of Nigerians will still go on as planned.

The Nigerian Missions in South Africa and Nigerian community, it was learnt were still working tirelessly to ensure smooth evacuation.

Though calm has returned after the Sunday night renewed attacks on foreign national businesses in Johannesburg, President Nigeria Citizens Association South Africa (NICASA), Prince Ben Okoli, said all efforts were geared toward the airlift of the first batch of Nigerian back home.

Okoli also revealed the possibility of having more than one flight in the evacuation exercise, which is to commence on Wednesday.

This, he said, was as result of the number of people who have shown interest to return to Nigeria as a result of the incessant attacks on Nigerians and their businesses by the South Africans.

According: “There may be more than one flight as the number of Nigerians who have indicated interest to go back home is on the increase.

“Already, we have over four hundred Nigerians who have indicated interest to come back home.”

He pointed out that the figure may be far more than the aircraft capacity.

On the renewed attacks on businesses owned by foreign nationals on Sunday, he said calm has returned as the police have taken over the situation.

Throwing light on the Sunday renewed attacks, Okoli explained that there was calm until Sunday evening when the Prince of Zulu Land, and former Minister for Home Affairs, Mangosuthu Gatsha Buthelezi addressed a huge crowed of Zulu citizens on the need to stop xenophobic attacks as it portrays the country in bad light.

This, he said, did not go down well with the crowd who stormed out of the meeting and went on destruction and looting spree of properties owned by foreign nationals.

Okoli however noted that the situation has nothing to do with Nigerians.

“The looting continued on Sunday night after one of their leaders addressed them on the need to stop the attacks on foreign nationalities and the implication of their acts.

“They were not interested in what their leader was saying and while they were leaving in their numbers they resulted in looting again and also destruction of foreign-owned properties and businesses but it has nothing to do with Nigerians this time as no Nigeria has suffered lose.

“Nigerians are following our instructions to close shops and not to do business until situation return to normalcy,” he said.