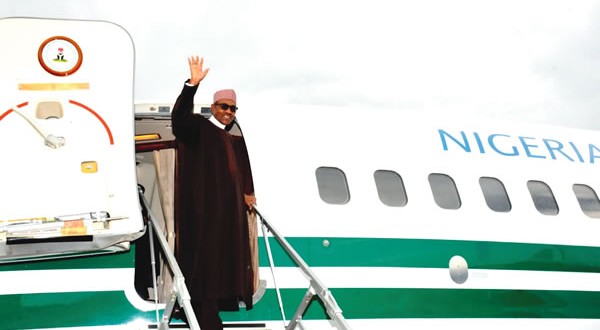 President Muhammadu Buhari has embarked on at least 52 foreign trips since May 2015 when he was sworn-in for his first term as President till date, expending approximately N4 billion in the process, Daily Times is reporting.

Investigations showed that Buhari has so far visited 30 countries cutting across four continents, including Africa.

According to analysis carried out by The Daily Times, Buhari has so far visited 16 African countries, seven Asian countries, five European countries and one country in North America.

Among the 30 countries visited by the President, further analysis shows that the United States of America and the United Kingdom topped the list with a record five visits each followed by France, Chad and Saudi Arabia with three visits each.

Similarly, checks on the President’s local trips revealed that there are some states in the country that Buhari is yet to visit aside for campaign or electioneering purposes.

Checks by The Daily Times revealed that the North East and North West are the only zones where Buhari has visited all the states, with Katsina his home state enjoying the pleasure to host him the most.

His visits to Anambra, Ondo, Kogi, Bayelsa and Akwa Ibom States were all campaign stops to rally support for his party in either the presidential or governorship elections.

Others include Delta, Ekiti, Oyo and Abia States.

It could be recalled that former Presidents Jonathan and Obasanjo received criticism for their numerous foreign trips while in office.

After ex-President Jonathan travelled out of the country at least 20 times in 2012, political pundits likened his many trips to that of Obasanjo, who was at a time adjudged by many as one of the world’s most travelled President with a record of 93 foreign trips within his first three years in office.

According to reports, he was said to have spent at least 340 days outside the country during his Presidency and travelled 400 times between 1999 and 2007.

Obasanjo like Buhari while delivering a speech at Oxford University said the frequent foreign trips were targeted at restoring the country’s “bad image before the comity of nations following years of brutal military regimes.

“Everywhere people had poor opinion about us. We were scorned at and viewed as a liability in the comity of nations.

“The situation demanded that I worked to stave off that perception. As a country under political transformation, I applied myself scrupulously to the task at hand.

“For the eight years that I served, I reached out to world leaders and continue to do so beyond my presidency. That was termed shuttle diplomacy in governance.

“I travelled extensively, canvassing global understanding and our mainstreaming into the new world order, not only for Nigeria, but for the whole of Africa. By the time I finished my two-terms, I had travelled to 97 countries.”

Meanwhile, the Peoples Democratic Party has criticised the President for globe-trotting despite mounting economic distress and grave security situation in the country.

The party said it is unfortunate that rather than be of economic value, most of Buhari’s foreign travels have been junketing.

The National Publicity Secretary of the party, Kola Ologbondiyan, told the Daily Times that the PDP had many times in the past taken up the President for his wasteful travels which has cost the nation several billions of naira.

Ologbondiyan said these are apart from taxpayers’ money expended on Buhari’s medical tourism in the United Kingdom, describing as “untrue claims by Buhari’s handlers that his trips have been of economic benefits to the country.”

Rather, the party said his travels have not resulted in increased direct foreign investments into the country, but the loss of businesses and jobs.

But, rising in defence of the President, aides and associates of President Buhari said Nigeria under the All Progressives Congress administration has reaped the benefits of trips made by him since assuming office.

Senior Special Assistant to the President on Media and Publicity, Garba Shehu, is quoted to have replied to critics of the President’s frequent trips, defending the need for the trips by saying that “those trips by the President are not jamborees, but for the good of the country.”

READ  Ranching: You owe a land only when you’re alive – Presidency

He added that the President embarked on the trips to negotiate with foreign countries on how to repatriate stolen funds stashed in foreign accounts abroad, to seek assistance from world leaders in his administration’s fight against corruption, promote trade and investment as well in the quest to revitalise the country’s dilapidated infrastructure in the areas of rail, power and roads and other critical sectors.

He alleged that the PDP has always engaged in unnecessary controversies, arguing that each of the President’s trips have been purposeful and rewarding to the country.