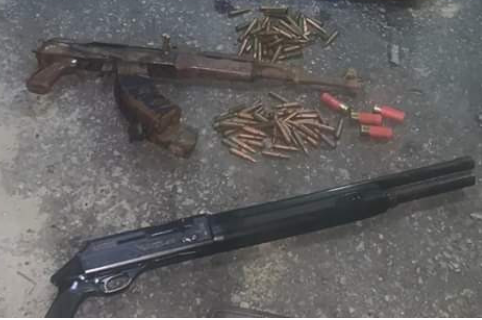 The Police Public Relations Officer in the state, DSP Nnamdi Omoni confirmed the incident and disclosed that one police officer while acting on a credible information trailed a Black Mazda car with Reg.no KNM 504 Rivers with four suspected armed robbers on board who were on their way for an operation.

”On sighting the Police, the robbers immediately jumped down from the car and opened fire on them and in a return fire two of them were fatally wounded, while two others escaped with life threatening gun shot wounds.

He stated further that after the encounter, the following Exhibits were recovered: One AK47 Rifle, Eighty Three (83), rounds of 7.62mm, Two Magazines, One Pump Action Gun, Four Cartridges, and Operational vehicle.

Police assured that they have declared manhunt for the rest and efforts are seriously on to arrest other members of the deadly gang on the run.

“The Public and indeed residents of Rumuagholu and Rumuokoro are enjoined to increase their security consciousness and report any person or persons with gun shot wounds to the nearest Police Station via the following security numbers: 08032003514, 08098880134,08182157778”

Omoni assured that the Command will spear no efforts in dealing decisively with all criminal elements in the State, especially in these EMBER MONTHS,( between September-December) and solicited cooperation in this in nabbing criminals in the state.

Photo credit: Allwell Ene, Media Assistant to SA to the Governor on SDGs.