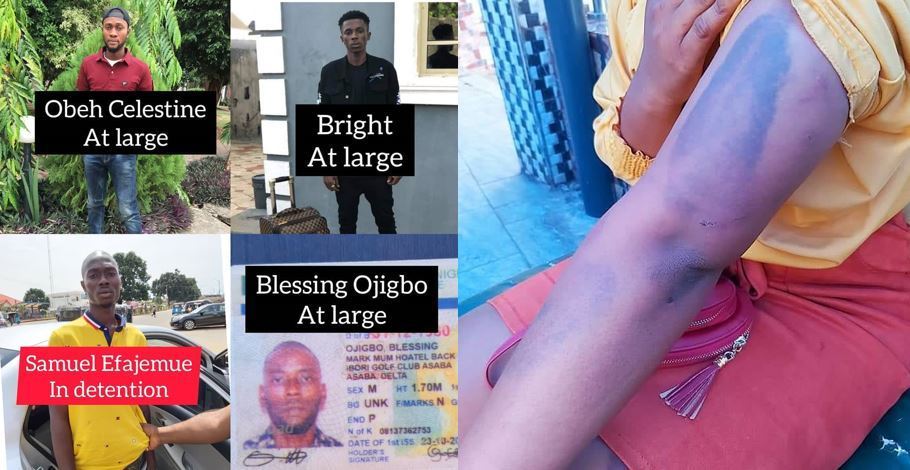 The identity of four men who allegedly gang-raped a 20-year-old girl in Delta state has been revealed. Popular activist, Gwamnishu Harrison had 2 days ago reported of the alleged rape of the 20 years old girl.

“Earlier today, we received a complaint about a 20-year old girl who was ganged raped, robbed, filmed and video released on social media.”

“Giving her narrative, she said her friend introduced her to a boy (Blessing Ejigbo). They met and on Friday 6th September, 2019, she visited his house to acclimatise with him on a relationship level which later turned to be her nightmare.”

“Ejigbo Blessing accused her of stealing N31,000 and called about 9 of his friends which includes neighbours overpowered and stripped her naked. Three of them raped her in turns, recorded their act and published on social media.”

“They also took her ATM card and pin, cleared her little savings.”

According to a new report by Harrison, the identity of four of the suspects of the crime have been revealed; Samuel Efajumue, Celestine Obeh, Ojigbo Blessing and Bright.

The report, however, stated that, only Samuel Efajumue has been arrested while the other three suspects are at large and that they have been declared wanted for the criminal case against them.

“We have arrested one of them through 48hours BBI-Hitech. Samuel is now in SACU detention Delta State Police Command. others are yet to be arrested.”