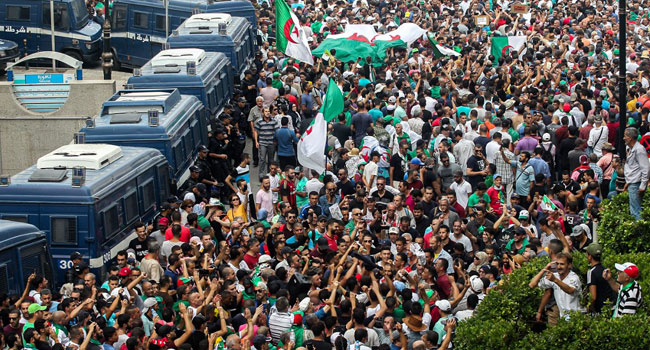 Protesters in their Thousands took to the streets of the Algerian capital on Friday in defiance of a heavy security presence to demand the ouster of the country’s army chief.

The Demonstrators gathered near the capital’s main post office square, the epicentre of Algeria’s protest movement that forced longtime President Abdelaziz Bouteflika to step down in April, this time calling for the ouster of General Ahmed Gaid Salah.

“The people want the fall of Gaid Salah,” the strongman in post-Bouteflika Algeria, they chanted. “Take us all to prison, the people will not stop.”

Friday’s protest marked Algeria’s 31st consecutive week of rallies, but protesters faced a heavy deployment of security forces in the city centre and along its main avenues.

Salah on Wednesday ordered police to block protesters from outside Algiers entering the capital to boost numbers at the anti-regime rallies.

The tougher line on protests came just days after interim president Abdelkader Bensalah announced a December 12 date for a presidential election to fill the vacuum left by Bouteflika’s departure.

The army chief has led the push for polls by the end of 2019, despite mass protests demanding political reforms and the removal of the former president’s loyalists — including Gaid Salah himself before any vote.

In the runup to the latest rally, as on previous Fridays, police made several arrests near the square, AFP photographers said.

Police stopped vehicles on main streets in the capital and an AFP journalist saw officers in plainclothes ask for identity papers, before some were led off to nearby vans.

As a police helicopter scoured the skies, security forces also stopped cars headed towards the city centre from its southwest entrance, where a dozen anti-riot police vans were stationed.

Said Salhi, deputy head of the Algerian League for the Defence of Human Rights, condemned the heightened security measures as “illegal”.

Demonstrations have officially been banned in Algiers since 2001 but the prohibition had been ignored since rallies started on February 22 against the ailing Bouteflika’s bid for a fifth presidential term.