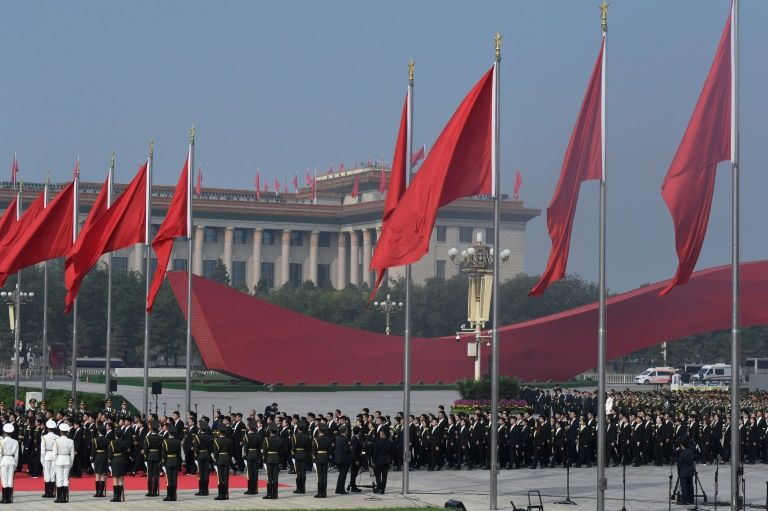 President Xi Jinping will preside on Tuesday over a large military parade and pageant involving 100,000 performers as China commemorates the 70th anniversary of Communist rule and its rapid emergence as a global power.

National Day is an important holiday in China’s political calendar and the authorities in Beijing have left little to chance: For weeks they have imposed an extensive security crackdown around the country and across the internet.

But as much as China wants to project a vision of itself as prosperous, powerful and unified, anti-government protests in Hong Kong threaten to overshadow the festivities.

Here’s a look at why Oct. 1 is so important and what to expect on Tuesday.

What is National Day?

The People’s Republic of China was founded on Oct. 1, 1949, after the Communist Party, led by Mao Zedong, defeated the Nationalist Party in a civil war.

On that day, a ceremony was held in Tiananmen Square to celebrate the formation of the Central People’s Government. It included a parade by the People’s Liberation Army and an address by Mao Zedong, the country’s new leader, from the nearby Gate of Heavenly Peace.

Tuesday’s ceremony, like those of the past seven decades, will echo the pageantry of that first National Day. President Xi will oversee a military parade and deliver a speech. For many Chinese people, it is a day of patriotic celebration that is followed by a weeklong holiday.

The military is expected to show off new weapons, including an intercontinental ballistic missile capable of reaching the United States, supersonic drones along with tanks.

President Xi, the most powerful Chinese leader in decades, is expected to highlight the Communist Party’s role in taking the country from isolated and impoverished 70 years ago to a making it a key player in international relations and the world’s second-largest economy.

China watchers will be studying Mr. Xi’s remarks for any references, implicit or otherwise, to the political turmoil in Hong Kong and whether he uses the day to warn the city to stop testing the central government’s patience.

The party is hoping that the fanfare and fireworks in Beijing overshadow the fury and firebombs expected in the streets of Hong Kong.

Ahead of the holiday, the authorities have taken measures around the country, but particularly in Beijing, to ensure the festivities are not disrupted.

The area around Tiananmen Square will be on lockdown, and residents who live on nearby streets have been told to remain at home. Passenger trains will undergo security checks and all unauthorized flying objects — including racing pigeons — have been banned.

But the authorities are also policing cyberspace. Internet access in the city has been throttled and Weibo, the popular microblogging site, said it would delete content that “distorts” or “insults” Chinese history.

National Day is a holiday in Hong Kong too, and workers and students who will have the day off are expected to hold anti-government protests.

Pro-democracy protests have been a mainstay of National Day commemorations ever since the former British colony returned to Chinese control in 1997. But this year is different.

The protests have forced the city’s government to cancel the annual fireworks display over its famed Victoria Harbor. The government also did away with a public viewing area for a flag-raising ceremony on Tuesday Morning.

The semiautonomous city has been roiled for months by demonstrations that have become increasingly violent. In July, an estimated 2 million people marched against a proposed bill that would have allowed the people in Hong Kong to be extradited to the mainland to face trial. The city’s embattled chief executive, Carrie Lam, withdrew the bill last month after weeks of protests. But the protesters’ demands have expanded to include universal suffrage and an investigation into the police’s use of force.

The city has not yet seen another march of that size, but every weekend since has seen protesters clashing with the police, including this past weekend. Officers have deployed tear gas and pepper spray, actions, some residents say, that amount to excessive force.

Protest organizers hope that a large turnout on the streets on Tuesday will force the world’s attention away from Beijing and onto Hong Kong, and have called on residents to wear black and participate in a march through the city’s center.