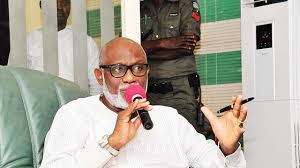 The Ondo State Governor, Mr Oluwarotimi Akeredolu, Tuesday said the leadership of the country must brace up in its strategies to develop the country, adding that all excuses for the nation’s underdevelopment 59 years after independence have been exhausted.

Akeredolu, who spoke during the celebration of the 59th independent anniversary, admitted that Nigeria has not got to where it should be since it got independence from the British government 59 years ago.

Represented by his deputy, Hon. Agboola Ajayi, the governor said the task before the leadership of the country is to build a strong and viable economy that would generate a prosperous, progressive and dignified life for the good of the country and the state.

He said the county can achieve her desired destination with more hard work, enterprise, creativity and constant fight against corruption.

The governor noted that the nation is going through some challenges ranging from insecurity of lives and properties, poor welfare and other vices which are making lives difficult for the people.

He however said foundations were being laid and frantic efforts were being made to solve all the challenges being faced by the citizens.

Specifically, the governor said the state government is collaborating with the federal government and South-west states to map out strategies to stamp out banditry and other forms of criminality from the states.

Akeredolu said his administration has procured 120 motorcycles and 20 Hilux buses to aid the fight against insecurity.

He said a security outfit codenamed “Operation Amotekun” would soon be inaugurated in the South-west geo-political zone in order to tackle insecurity in the zone.

Akeredolu said that the government was doing everything possible to improve the economy of the state and ensure that the citizens enjoy new lease of life.

He added that his government would fight corruption, waste, inefficiency, ineffectiveness and unpatriotic attitude in the state.