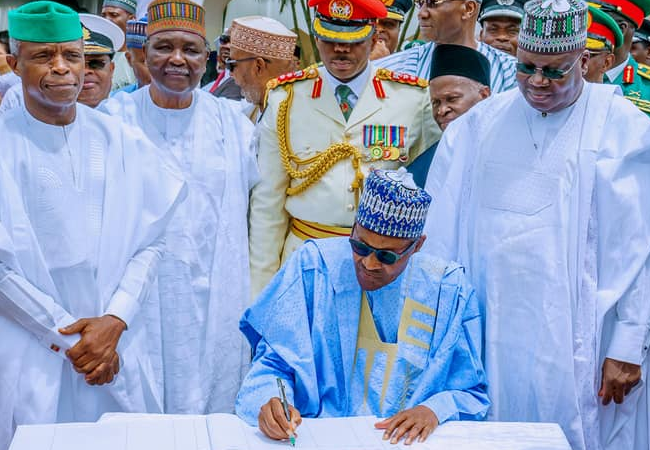 Nigerians have reacted to the independence broadcast by President Muhammadu Buhari, calling an insult to Nigerians, among others.

The Peoples Democratic Party on Tuesday said the broadcast was an insult to the psyche of Nigerians.

The opposition party in a statement on Tuesday by its National Publicity Secretary, Mr Kola Ologbondiyan, also described Buhari’s broadcast as a mockery of an independent state like Nigeria.

The PDP said Buhari’s broadcast had further confirmed that Nigeria was in wrong hands.

It said, “The PDP notes that President Buhari, in his recorded address, failed to forcefully address the key issues of freedom, social justice, constitutional order, separation of powers, rule of law, human rights, credible elections, national cohesion, accountability and transparency in government; the very fundamentals of an independent state, because his administration had violated them all.

“Our party notes that this address further exposes that the Buhari’s Presidency is not interested in nation building; that it is completely disconnected from the people and remains insensitive to the plights of Nigerians.”

According to the PDP, under Buhari Nigeria has experienced “the worst form of division, deprivation, human right abuse, constitutional violations, disregard for rule of law, electoral malpractices, disobedience to court order, disrespect for separation of powers and curtailing of press freedom.”

The opposition party said, “The dearth of foreign direct investments and the inhuman treatments being meted out to our citizens in countries where we were once held in very high esteem are some of the injuries our nation is suffering under the Buhari administration.

Omokiri said contrary to Buhari’s claim to have defeated Boko Haram, the insurgents were in control of eight local government areas of Borno State.

He alleged that the Nigerian military was fighting the terrorists with outdated weapons purchased in the 80s during the administration of the late President Shehu Shagari.

“This is the joke of the century from a man who threatened to ‘soak the dog and baboon in blood.’

“@MBuhari said, ‘This administration inherited a skewed economy,’ Buhari inherited an economy rated by the CNNMoney and WorldBank as the world’s third-fastest growing economy! He ruined it in one year.

“Buhari said ‘exchange rate in the last three years has remained stable,’ Google it. The naira was rated the fourth worst performing currency three years ago and one of the most depreciated two years ago.

“Buhari said we have ‘robust reserves of US$42.5bn,’ what he failed to tell you is that he has more than doubled our debt; when you minus the reserves from our debt, we have no reserves.”

Buhari’s broadcast was also greeted with criticisms by Nigerians who commented on PUNCH online.

In response to the President’s claim that Nigeria under him had made progress,one Oguntade wrote, “Progress in lawlessness. What an achievement for outlaws?”

But another commentator, Fen Awan defended the President.

Awan said, “Two things stand out in this speech.

One, we have to rededicate ourselves. Second, this government inherited a skewed economy. The PDP did not know the economy was skewed. Their plan still does not include putting it right and redressing the imbalance. They just want power so they can live big and make their bellies big again!”

Another commentator, Ajayi olupono said, “I am of the view that that Nigeria was one thousand times or probably one million times better while the country was under the colonial rule of Britain if compared to the present sorry state of the nation at almost 60!

“For example, it was about two decades after independence that our public schools were all practically abandoned; our roads transformed into death traps, the railways and the Nigerian airways were ruined and our once effective general hospitals turned into mere mortuaries!

“Beside the general panic and the mass exodus of our youths in their millions to other nations due to hardship and mass kidnaps mass killing, Nigerians no longer have access to ordinary power and potable water!”

Another commentator, Comfortkay said “With all due respect to the President and his speech, if with all our universities and polytechnics we are not in a position to build our own country then we have nothing to celebrate. How many engineers graduated last year alone from our institutions and how many of them are building our roads? Something is very wrong with Nigeria and its leaders.

“What are we celebrating? Independence? I don’t think so. It is better we still have the colonial masters that have human feelings than being ruled by devilish leaders.”

A former Vice-President of the Nigerian Bar Association, Mr Monday Ubani, while reacting to Buhari’s call on the citizens to be law-abiding, said it was up to the Buhari administration to take the lead in this respect.

Ubani, who said, “everything falls and rises with leadership,” said the government could not be demanding that citizens be law-abiding when it was disobeying court judgments and orders at will.

The lawyer said it was incumbent upon the Buhari government to put into action the things it was demanding of citizens.

Calling on the President to be more tolerant of opposition views, Ubani reminded Buhari that “Nigerians elected President Muhammadu Buhari to deal with Nigeria’s problems and not to deal with the citizens.”