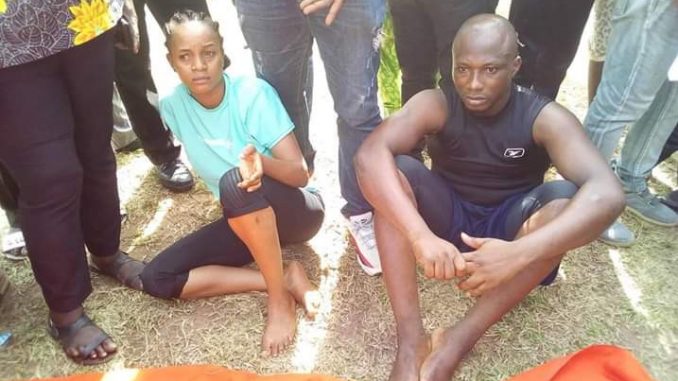 The suspected identified as Aidomoaki Samson with his girlfriend, Ezinne Iwuagwu were arrested at Aleke Hotel, Nekede, Imo State on September 30.

The suspect’s girlfriend is an accomplice of internet fraud because she is the one who acts as the suspect sister while contacting or sending messages to his client overseas.

The suspect confessed that he was an ex-footballer barred from playing football due to drug related offence after being subjected to several investigations by the Police.

While parading these suspects at the police headquarters, the State Commissioner of Police, Rabiu Ladodo disclosed that Ex-footballer was based in Benin Republic and Ghana.

“He impersonates as a national of Ghana while investigation has revealed that he is from Edo State, Nigeria,” he stated.

“His syndicate member one Mr. Eric in Italy disappointed him in Nigeria hence he then started the manufacturing of fake hard drugs with the intention to dupe and defraud people,” he alleged.