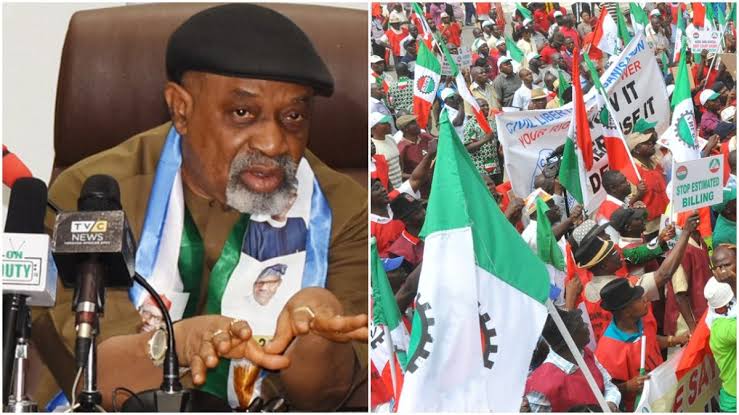 The Joint National Public Service Negotiating Council (JNPSNC) has described statement by Minister of Labour and Employment, Dr, Chris Ngige that the Federal Government may have to reduce the workforce in public service before it can implement labour’s demand as cheap blackmail.

The Secretary, Joint National Public Service Negotiating Council (JNPSNC), Alade Lawal while speaking for the labour union in an interview in Abuja, said that labour would not subscribe to such threat by the federal government.

He also said that the federal government does not need N580 billion annually to pay workers as claimed by Dr. Ngige during his meeting with United Labour Congress on Thursday in Abuja.

According to him, the number of employees in the federal public service is not up to one million.

He urged the government team to return to the negotiation table so that both parties can reach an agreement and conclude the process that will lead to the implementation of minimum wage to workers.

“The figure they are parading is not correct. They don’t need N580 naira, they don’t need it to implement (the minimum wage). The number of employees in the federal public service is not up to one million. They say it is 1.33 million. Let them disaggregate it and tell Nigerians. Break it down and let us do verification.

“The component part of this 1.33 million employees they are talking about is the consolidated public salary structure which majorly is domiciled under the IPPIS platform. As we speak, the employees there are not up to 70, 000. They said in their own papers they are using for negotiation is 183, 000. Where do they get all those things from?

“Because you want to negotiate something now you come to negotiation table and you start playing with figures. It is so sad. They think they are talking to labour of pre-independence. Some of them are just lucky to be there. It is not that they are better than some of us.”

He said the government team negotiating the consequential adjustment on minimum wage was yet to reach out to labour to inform them of when negotiation would resume.

Lawal insisted that labour would not backdown on its percentage increase demand from government for workers on levels 7-14 and levels 15-17.

“Up till now, they have not reached out to us. They are the owners of the knife and they also have the yam with them so they can do it the way they like. But if this is the way we want to run our country then I am sorry because we have a long way to go.

“You know where we started from. We started from 66.66 percent across board because the minimum wage was increased from N18,000, to N30,000, an increase of 66.66 percent. So we said apply that across the board. They cried that we want to throw the budget of the ceiling, that the federal government will not be able to pay. We came down for levels 7-14, we came down to 50 percent then levels 15-17, 40 percent, they said they cannot pay.

“To start talking about going down now will make us unserious, that is meaning.”

He also said labour was not sure if President Muhammadu Buhari had been properly briefed on the stalement.

“Now they are not telling Mr. President the truth. That is my worry. Truly, they are his aides. If we cannot reach him they are the ones that will reach him and if we say it is A and they go to him and say it is B, since he has not put on the table the machinery to fact-check most of the things they are telling him, it will be difficult. That is the tragedy of the whole situation. It is very, very said,” said.

He also said that all the pledge made by government after the fuel price increase from N87 to N145 was yet to be fulfilled.

“Let me explain one thing to you. When the fuel price was increased from N87 naira to N145 naira, an increase of about 60 percent, the landing cost of fuel was less than N100 naira as at that time. They raked in a lot of money, trillions of naira. They promised heaven and earth, social intervention. What did they do for workers? Nothing.

“For the fuel price increase from N87 to N145, they set up a palliative committee to placate labour, to ensure that we didn’t go on strike. I served in that committee and we made far-reaching recommendations. Labour was not given anything. Whereas, to placate us, they said that they had earmarked N600 billion for intervention that we should just come and meet and discuss how we are going to apply that N600 billion across the various sectors, including adding something to workers salaries in the area of transport.

“All the recommendations that we made they didn’t do anything, not a single thing. At the negotiation table they said they didn’t say so. Is that seriousness?

“Again, as at 2011 when the last increase was effected, dollar was 150 to a naira. Now it is 350. In effect, what you are saying is that if the foreign exchange receipt of the Federal Government is $20 billion dollars, at 150 to a dollar you know how much government will get to spend. Then at 360 naira- that’s a difference of N200 and something naira, you have a basket full of naira.

“Even on this VAT thing they are talking about, they are saying they are going to rake in trillions of naira. On this VAT increase that they have not even done something for workers,” he concluded.