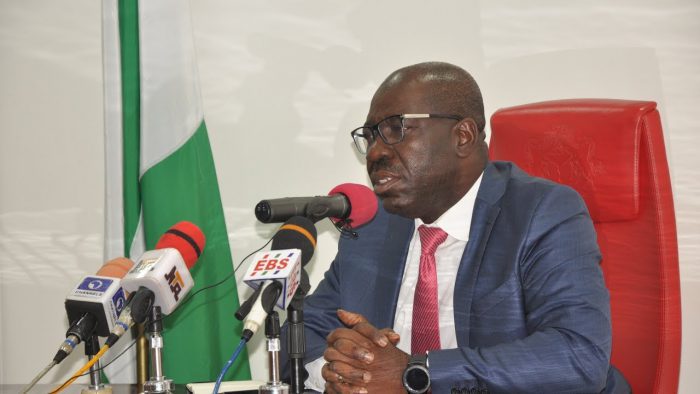 The Edo State Governor, Mr. Godwin Obaseki, has declared that he deserves a second term in office because he has fulfilled most of his promises to Edo people and also needs to consolidate his developmental strides in the state.

The governor emphasised that his second term in office is “not negotiable.”

Obaseki said this when he received members of the Benin Unity League at the Government House in Benin City, noting that “no individual can determine who will become governor. Only God and the people can make the decision.”

The governor said his interest to continue in office is for the right reasons, stating, “I have said it clearly and I told my cabinet members that second term for me is non-negotiable. I am demanding it because I deserve it and I think I have earned it. We need to have it so we can continue what we are doing today.”

“I want to assure you that this is a fight in which we will prevail. We will fight and succeed. If anybody thinks I will back out, he must be day-dreaming because it is not my fight; it is a fight for the right purpose. I am not going to back off because I know victory is sure,” the governor said.

He added that nobody can accuse him of implementing a wrong policy, adding that the accusations had been on him not focusing on stomach infrastructure.

“We earn less today than we did in 2016 when we came into power, so where is the money to waste? We know how much we inherited as debt; we have to service them. Some people sit and say we should focus on stomach infrastructure. I said no, that I will rather focus on mental infrastructure,” he said.

The governor expressed appreciation to the Benin Unity League for understanding where the challenges were coming from and for supporting the truth.

President, Benin Unity League, Dr. Gregory Osa, said the visit was to join other Edo sons and daughters to reject the mischief in some quarters aimed at prematurely pulling the governor out of office, describing the move as “borne out of selfish motives.”

Osa added, “You are providing an enabling environment to make Edo an industrial hub. We are particularly interested in your push to develop the Benin River Port and the Benin Airport. You will not only win the battle; you will win the war.”

He explained that the association is a socio-cultural and non-political association established in 1983 comprising notable Benin Professionals.