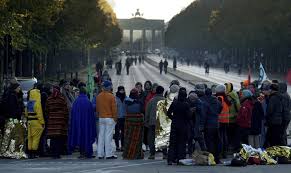 Hundreds of climate protesters demonstrated in Amsterdam on Monday, blocking a main road to the Rijksmuseum, a Dutch national museum, in the centre of the capital.

Although the municipality of Amsterdam banned such blocking, protesters of the so-called action group Extinction Rebellion continued their road blockade. The protesters said they will continue with blockade for a week and want the government to enforce more climate measures.

The demonstration is part of an international campaign which also takes place in Berlin, Paris, Sydney, and London.

Over 50 demonstrators were arrested by the Amsterdam police early in the morning.

The Amsterdam police tweeted “the action is primarily aimed at de-escalation and a proper end of the blockade and safe flow of traffic.’’

The Amsterdam municipality called for demonstrators to move to a nearby Museumplein square behind the Rijksmuseum, but protesters refused.

The area around the Rijksmuseum is closed off by police officers.